Let's celebrate with this festive cupcakes recipe! Red and white marshmallow buttercream frosting that is beyond creamy and delicious on top of super soft blue vanilla cupcakes with lots of red, white & blue sprinkles. By the way, have you tried my caramel cupcakes? 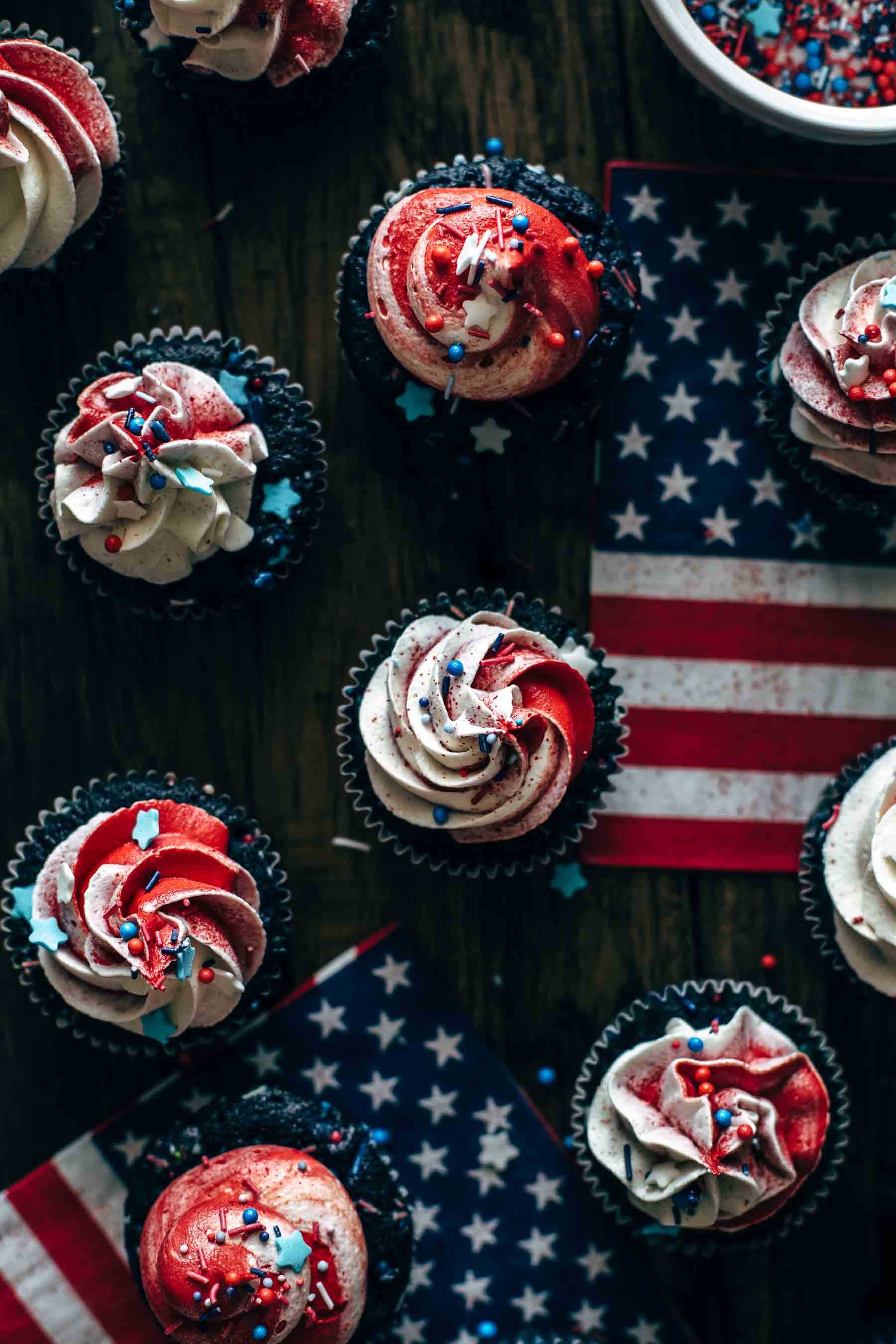 Around this holiday, it feels like everything is colored in red, white & blue. So let's bring some colors into your kitchen and on your family table with this festive recipe. The best thing is that they are very easy to make that you have more time for celebrating. 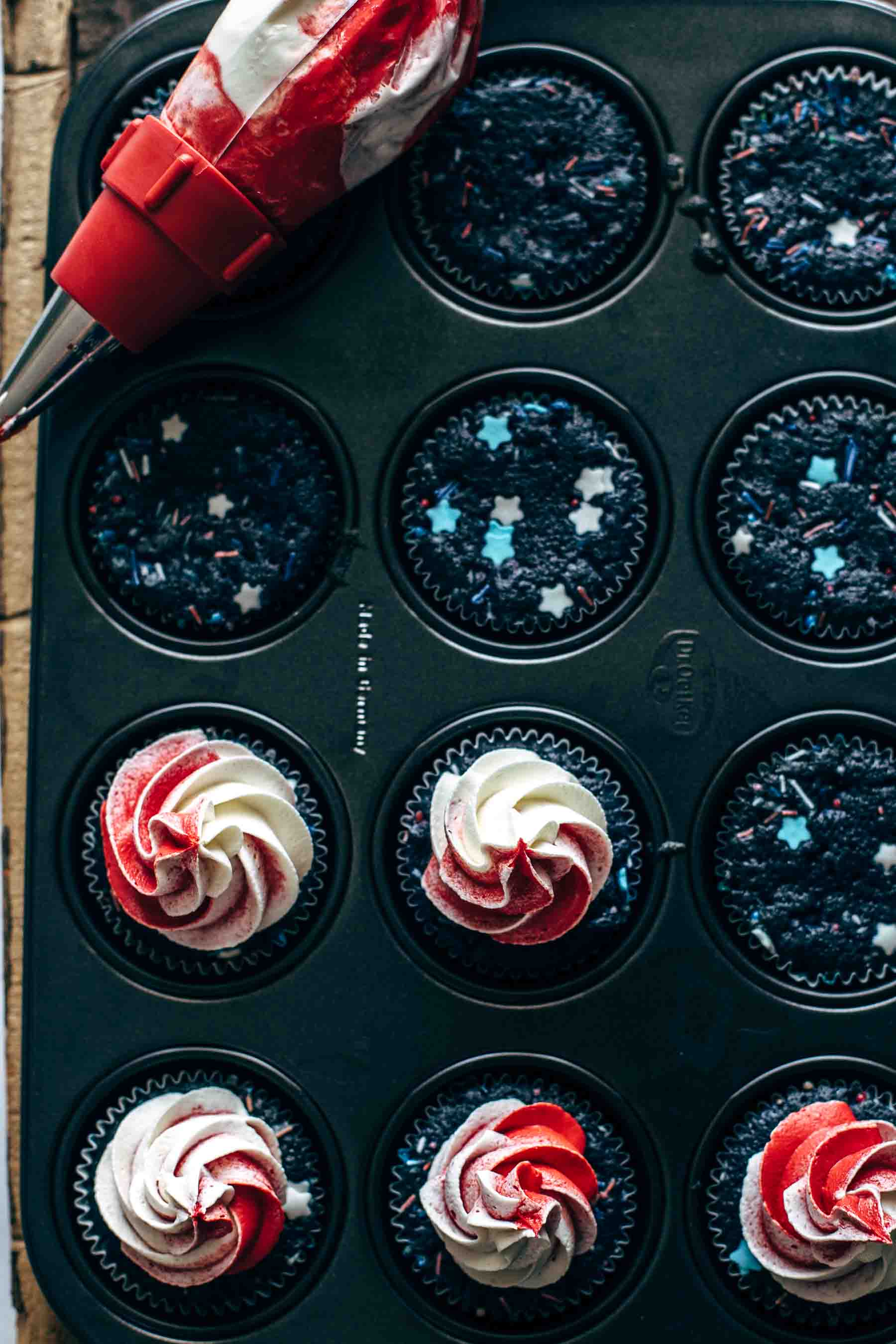 These cupcakes are soft, moist, and super delicious. The recipe is so easy to make as well.

Just combine flour, baking powder, and salt. Then mix an egg with sugar until creamy. Add vegetable oil and vanilla and stir to combine. Alternately add dry ingredients and buttermilk, beginning and ending with dry ingredients.

Then color with navy blue until you reach the blue color of the US flag. Stir in sprinkles to combine. I used different kinds of red, white & blue sprinkles.

Do you want to go just with white star sprinkles? Absolutely fine. Use the sprinkles you like the most. But be sure to use sprinkles that don't dissolve completely throughout baking.

After filling the batter into cupcake liners sprinkle additional sprinkles on top. Especially around the edges because these are still visible after frosting the tops. 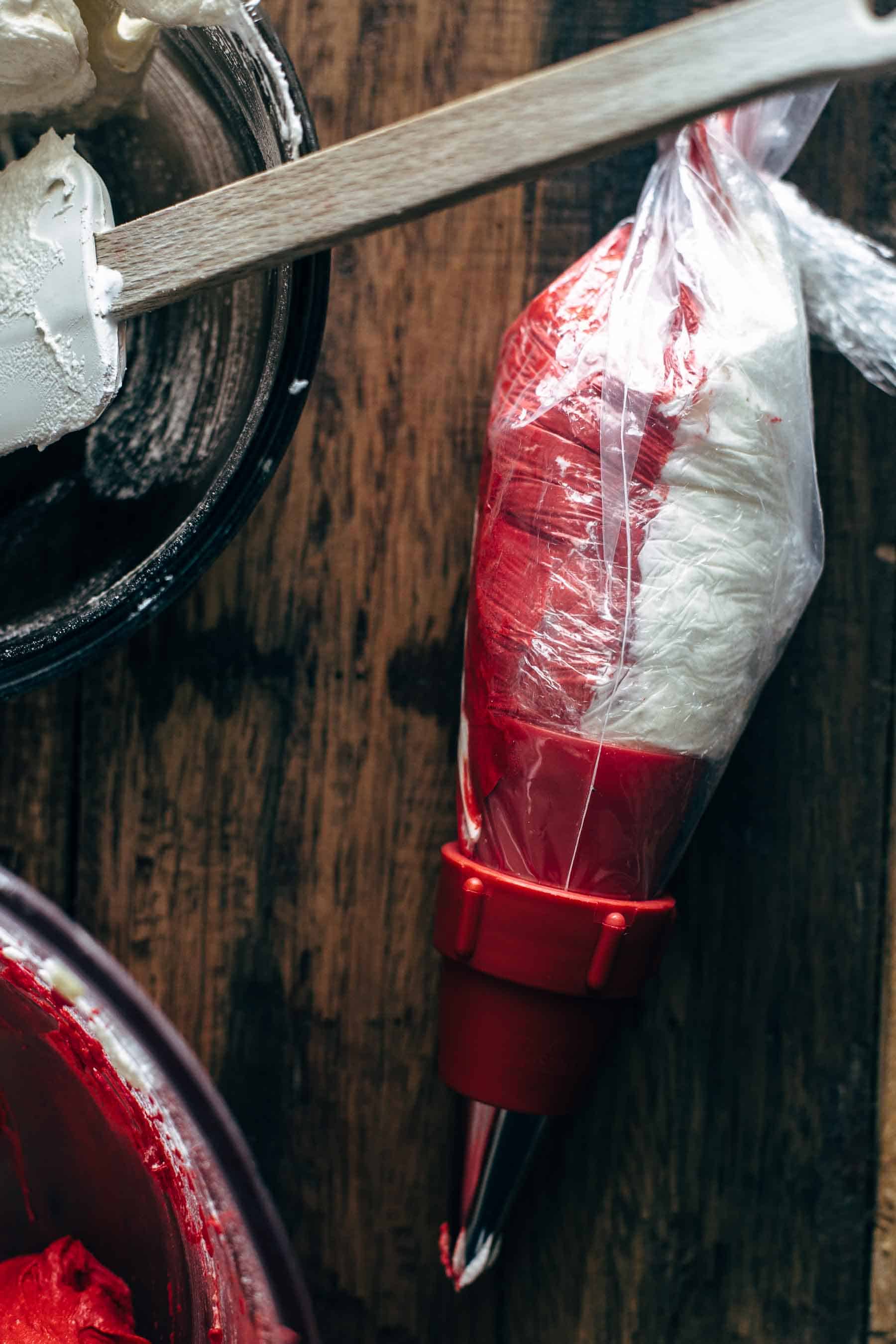 The texture is super creamy but firm enough to beautifully pipe roses, swirls, or any shape you want. It holds its stand for days but literally melts away in your mouth.

The amount of the frosting is enough to frost 15-16 cupcakes thickly. I don't know how about you but I love to have a very high swirl of frosting on top of my cupcakes, you know what I'm saying?

After making the frosting, divide in half and color one half with red until you reach the red color of the US flag. Then place the white and red frosting on a piece of plastic wrap next to each other and roll it up.

Then place the plastic roll into a piping or ziplock bag and pipe on top of the cupcakes. Watch the video below for better understanding. Sprinkle with even more red, white & blue sprinkles or nonpareils. 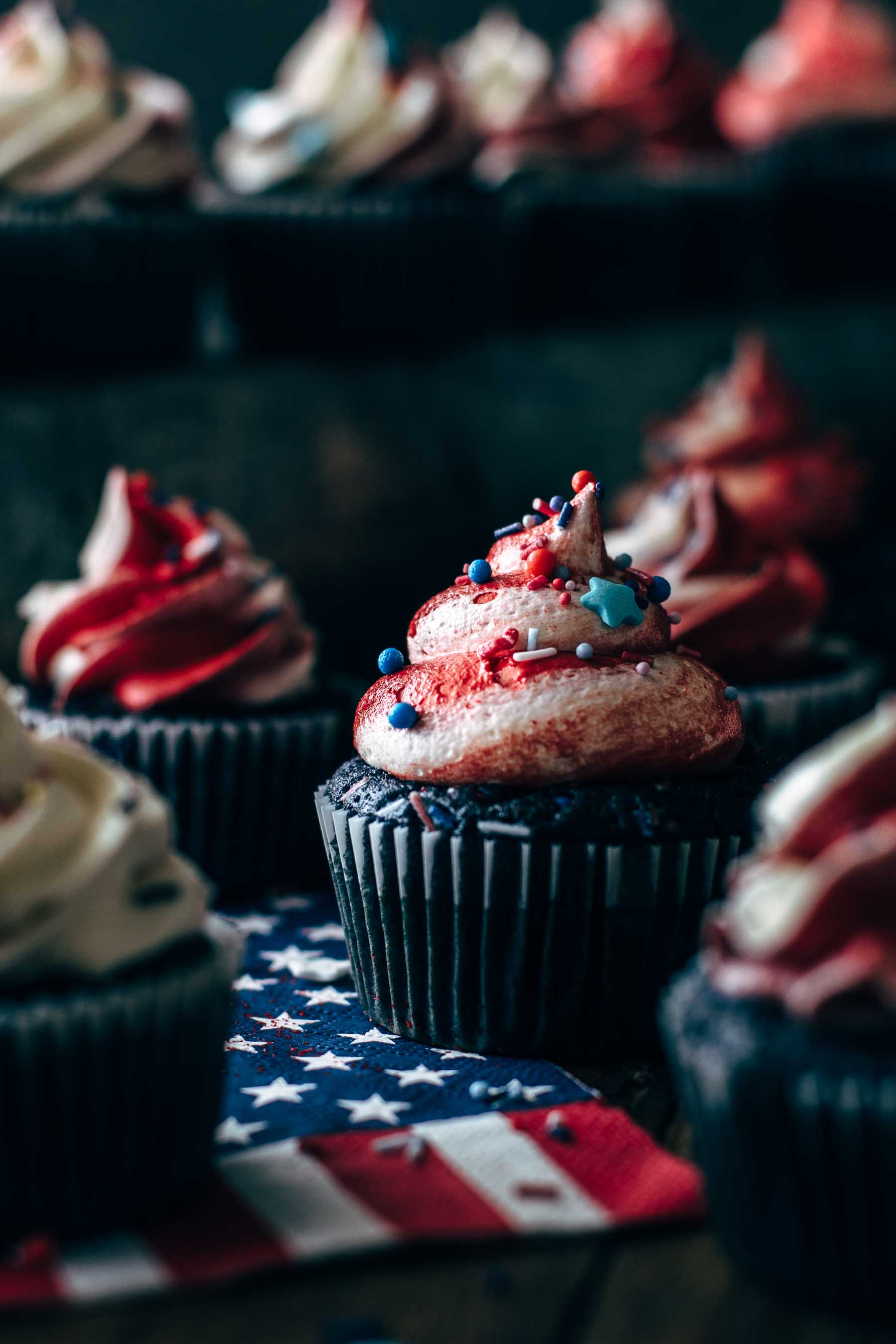 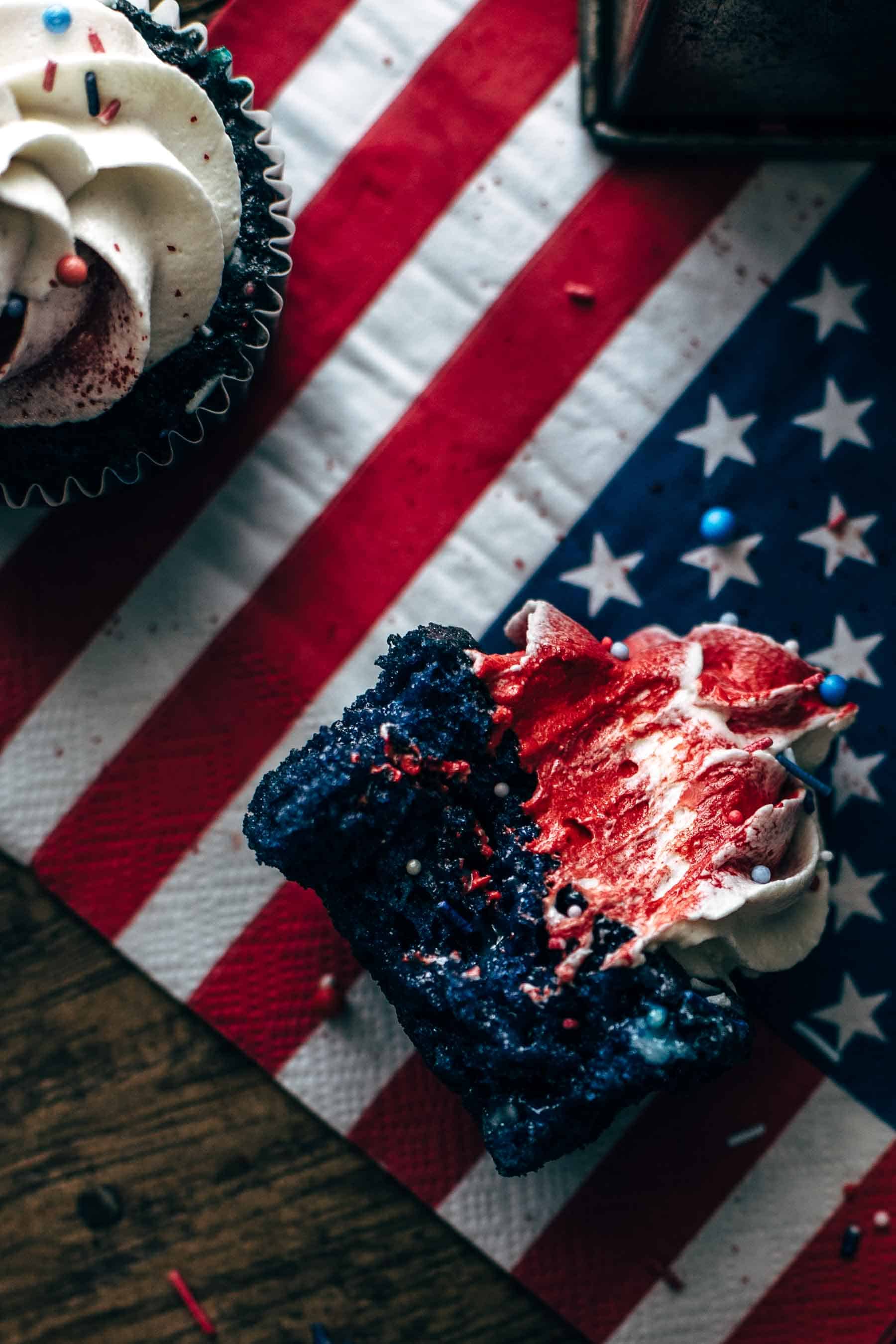 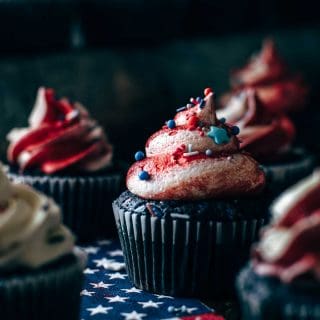