This super delicious Apple Pecan Bars recipe is quick and easy to make. Just 10 ingredients and 15 minutes of active preparation time. Made from scratch. 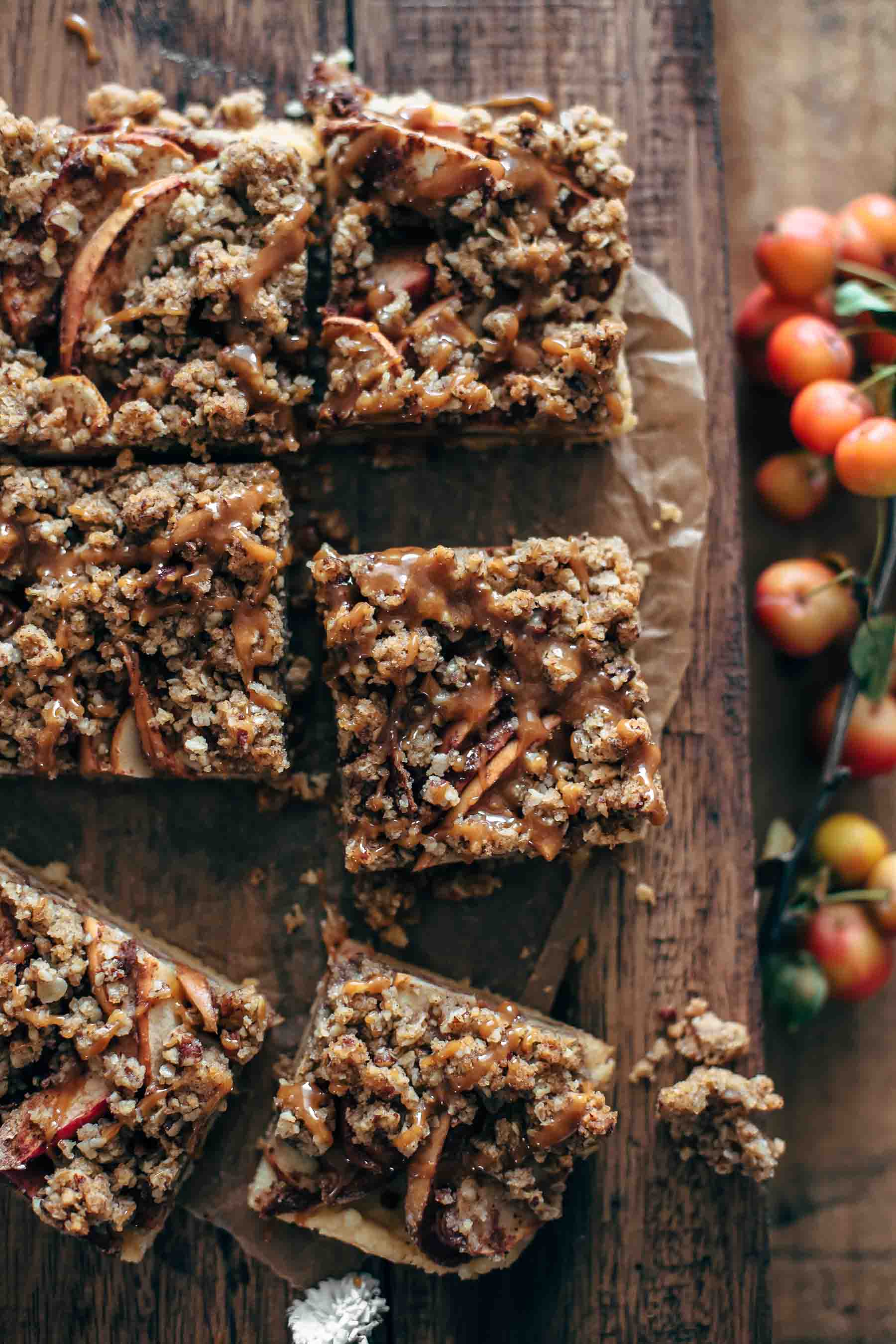 These bars have a buttery shortbread crust, are filled with cinnamon apples, and topped with a crunchy sweet pecan oatmeal topping. Top them with caramel sauce, and you are going to be in heaven.

The shortbread crust is done with just 4 ingredients. Butter, flour, sugar, salt. The easiest way is to make it in the food processor. But alternatively, you can make it with a pastry cutter or two forks instead. Both methods are described in the recipe below.

The apple filling is amazing. It is not overly sweet and tastes like sweet and fresh but soft apples. I recommend Honeycrisp because this is my favorite apple but every apple you love works fine.

Just slice the apples thinly and combine with flour, sugar, cinnamon, and vanilla. Let stand until the crust is baked. Prepare the topping in the meantime.

The topping is crispy and tastes like pecan. I prepare my topping in the food processor as well because it is the easiest and fastest method.

Therefore, place pecans, flour, sugar, oats, salt, and butter in the food processor and pulse a few times. Alternatively, you can prepare the filling in a bowl. In this case, chop pecans finely and combine with all other dry ingredients in a bowl. Then cut in butter. You can do this with a pastry cutter or two forks instead.

Then layer the apples on top of the baked crust and sprinkle with the pecan topping.

Did I mention that I let the skin on my apples? But this is up to you. You can peel the apples before you slice them if you don’t want to have the skin.

After the bars are cooled, I love to top mine with caramel sauce. A super quick but-not-made-from-scratch version of a self-made caramel sauce is to combine 5oz wrapped caramels and 1-2 tbsp heavy cream in a bowl and warm in the microwave for about 2 minutes. Stir every 20 seconds.

If you are looking for a great caramel sauce made from scratch, I love this recipe from Sally.

Then top your freshly baked apple bars with the caramel sauce and scoop vanilla ice cream on top. That’s my favorite way to eat them. 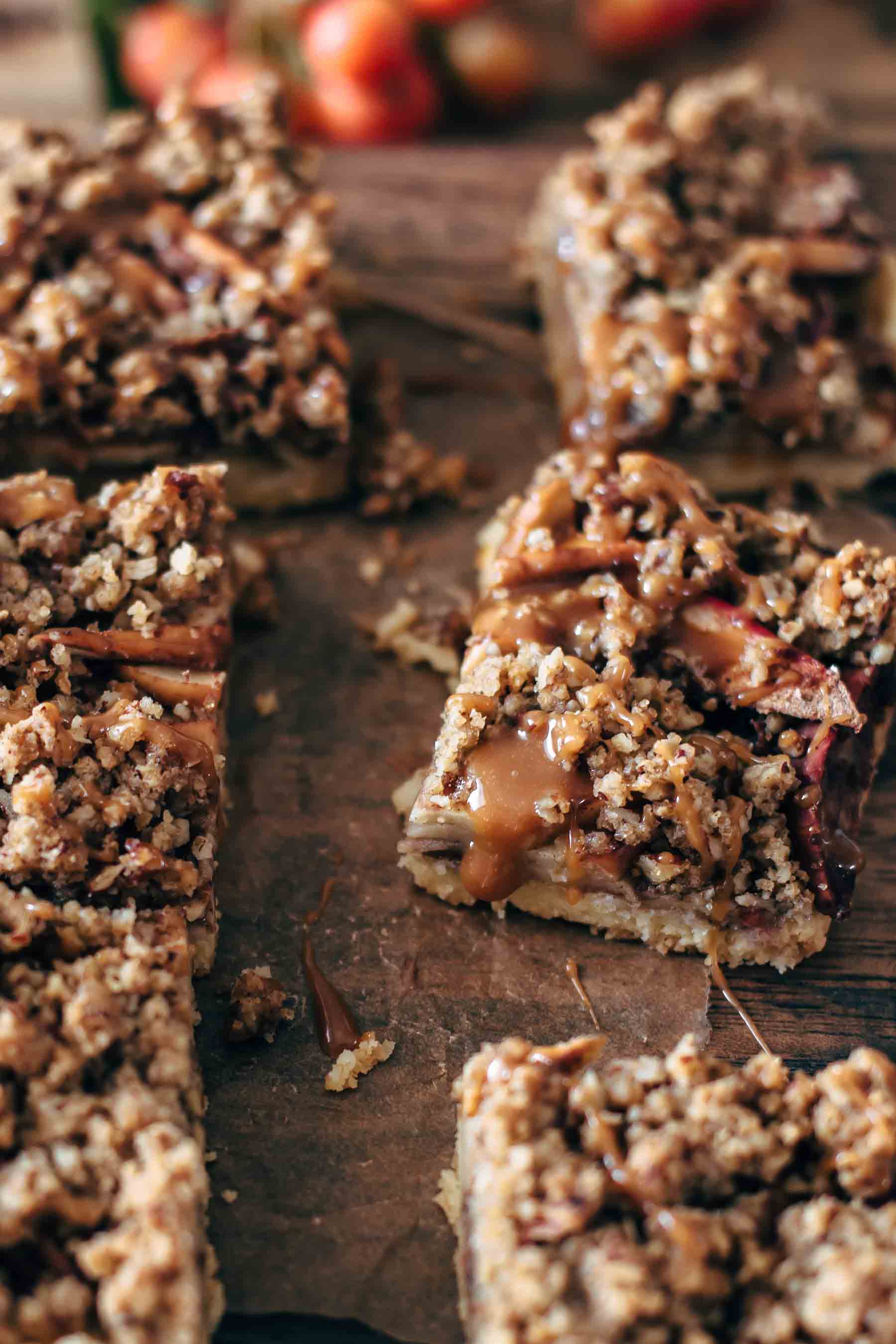 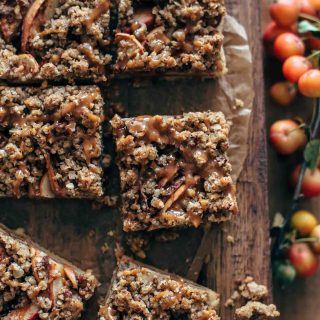 *First, cut off the straight end of the vanilla bean. Then place the tip of your sharp knife below the curled end and cut the vanilla bean through the middle of the bean lengthwise. Although you don't need to cut it all the way through, it's ok when you do so. Then open the vanilla bean and scrape out the flavorful seeds with the back of your knife. Then just use the seeds.

Hi, my name is Sabine Venier! I'm a cookbook author and passionate baker. Here at Also The Crumbs Please, you find trusted baking recipes with step-by-step tutorials. I show you how to bake from scratch!