No-bake blueberry cheesecake is an irresistible treat for all occasions. Its soft and creamy filling has an incredibly intense blueberry flavor. Due to the combination of homemade blueberry sauce, cream cheese, and whipped cream, it's a light filling that perfectly matches the graham cracker crust. In case you love no-bake cheesecakes, you should try my velvety and rich no-bake chocolate cheesecake as well.

In a heavy-bottomed pan, bring the blueberries, sugar, water, and lemon juice to a simmer.

Cook until the blueberries break apart, and the sauce stops foaming. Stir constantly.

Then stir in the cornstarch mixture and bring the sauce to a boil. Cook until it has thickened and reduced. When you start seeing the bottom of the pan while stirring, and the lines stay visible for a few seconds, you know the sauce is done.

Transfer the sauce to a shallow heat-proof bowl and let cool uncovered. Then cover and chill in the fridge for 1-2 hours or overnight. It thickens as it cools. Once cooled, it should look and behave like jelly.

In a medium bowl, combine the graham cracker crumbs, sugar, and melted butter and stir until the crumbs are evenly moist. Then, transfer the crumbs to a parchment paper-lined springform pan and press the crust into the bottom and halfway up the sides, using the base of a flat-bottomed cup. Freeze the crust until you are done with the filling.

In a large mixing bowl, whip the whipping cream and sugar until stiff peaks form. Transfer the whipped cream to the fridge until you are done with the next step.

In a large mixing bowl, mix the cream cheese, sugar, and vanilla until creamy, combined, and no lumps remain. Add the chilled blueberry sauce (must be cold and as firm as jelly) and fold it into the cream cheese mixture until well combined.

Gently fold one-third of the whipped cream into the blueberry mixture.

Proceed with the remaining two-thirds of the whipped cream. Be careful that you don't overwork the filling. It's perfectly fine to have a few streaks of whipping cream throughout the filling.

Transfer the filling to the prepared crust and spread evenly but carefully without deflating the filling. Chill in the fridge overnight.

Why is my filling too soft and didn't set?

My recommendation: Please watch the video and the step-by-step photos for visualization to see how the consistencies of the ingredients are along the process. Also, please read the instructions carefully and my tips for success (previous chapter).

How to fold whipped cream into the filling?

After chilling the cake in the fridge as described, freeze it for 1 hour in the freezer. Then wrap with plastic foil tightly and store in a large freezer bag or container. To thaw, unwrap the cake and store it covered in the fridge overnight. Serve the next day.

This recipe was originally made with an Oreo cookie crust. The combination of blueberries and Oreos may sound funny but is very delicious. Try it yourself. Make the crust as directed and swap the graham crackers for 36 Oreo cookies. Crash them with the filling into fine crumbs and combine with the butter.

If you love cheesecakes as much as I do, you will love the following recipes as well. They are loved by family, friends, and readers around the world. 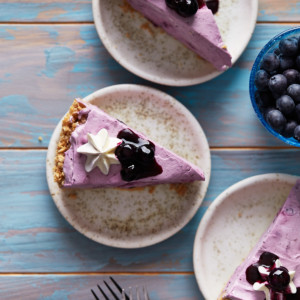 Small batch cheesecake Simply divide the recipe in half and make it in a 6" springform pan or use a muffin pan and make mini cheesecakes. Oreo cookie crust This recipe was originally made with an Oreo cookie crust. The combination of blueberries and Oreos may sound funny but is very delicious. Try it yourself. Make the crust as directed and swap the graham crackers for 36 Oreo cookies. Crash them with the filling into fine crumbs and combine with the butter.

This recipe was originally published on March 21st, 2019 but has been reworked and improved based on readers' feedback.