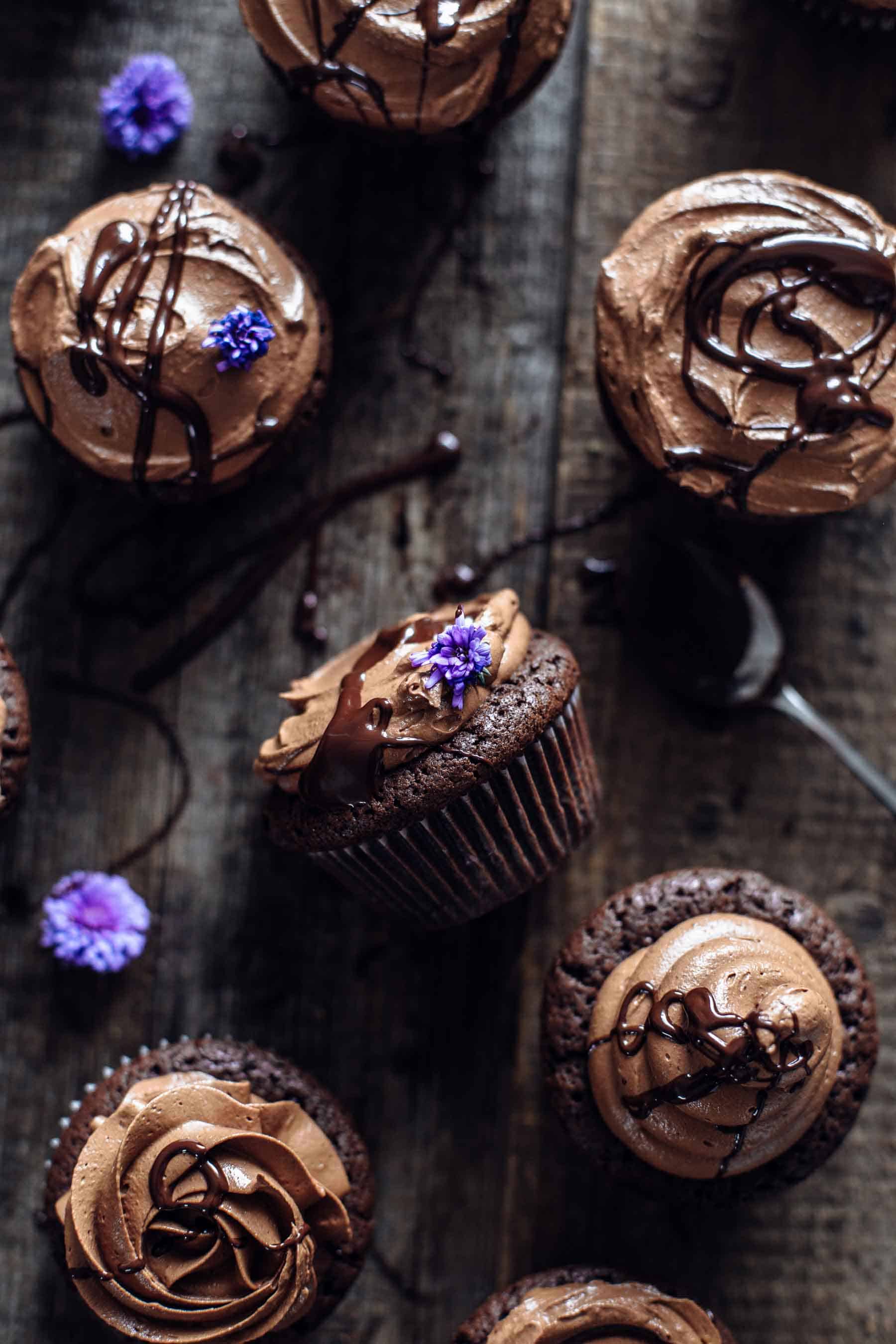 We all love brownies, right? I see that my brownies, peanut butter brownies, and also the brownie cookies are always among the top posts.

Now imagine them in the shape of cupcakes with crinkly and chewy tops and frosted with ultra-creamy and silky dark chocolate buttercream. If this isn’t mindblowing, I don’t know what it is.

Please find the full recipe below. Just for visualization, I provided some photos throughout the baking process.

Question: Were you ever tempted to eat some of the raw chocolate batter (like me)? If yes, I'm sure you will love my edible brownie batter recipe!

Fill up the cupcake liners until they are almost full like in the picture below: 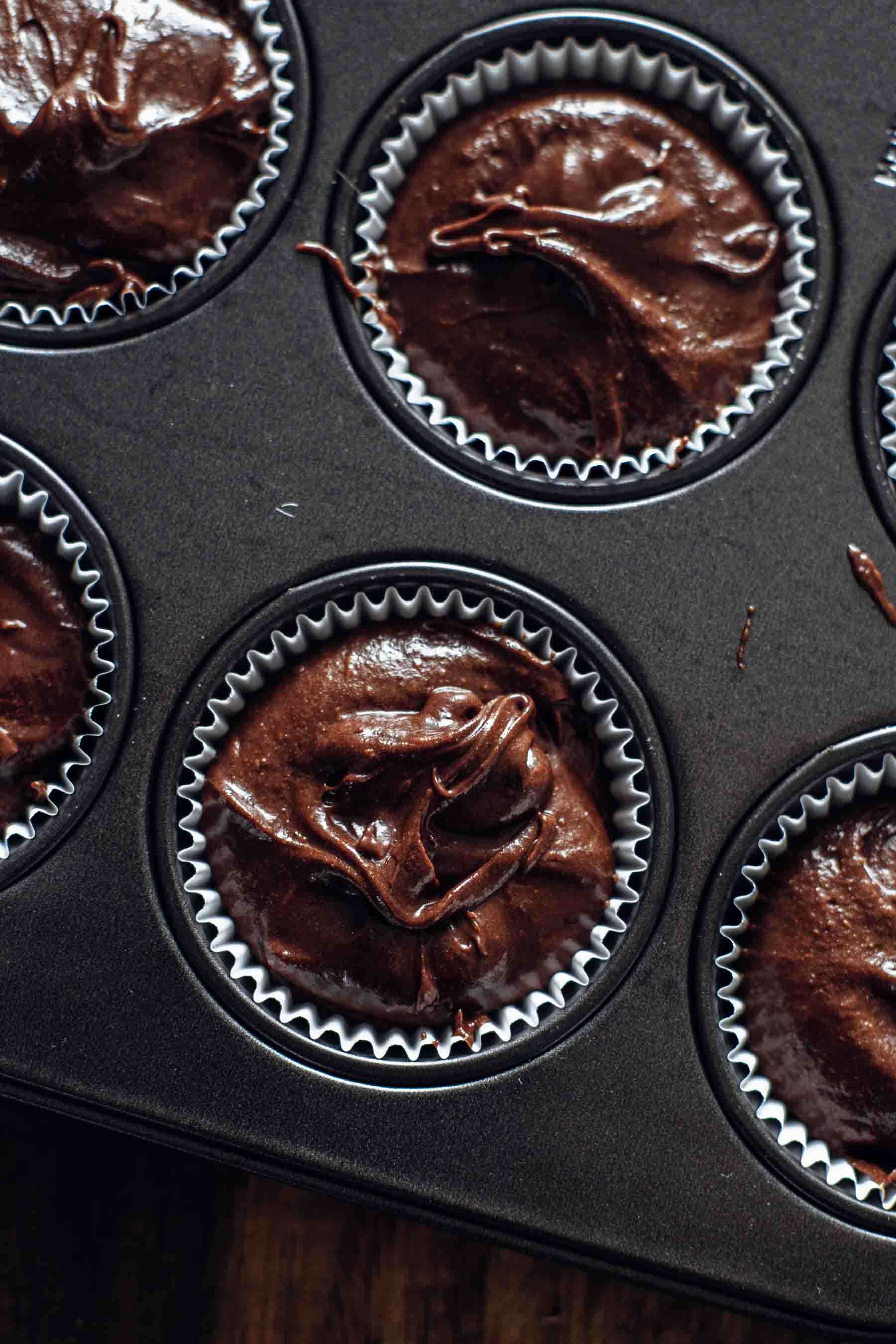 Here you see the baked and unfrosted brownie cupcakes: 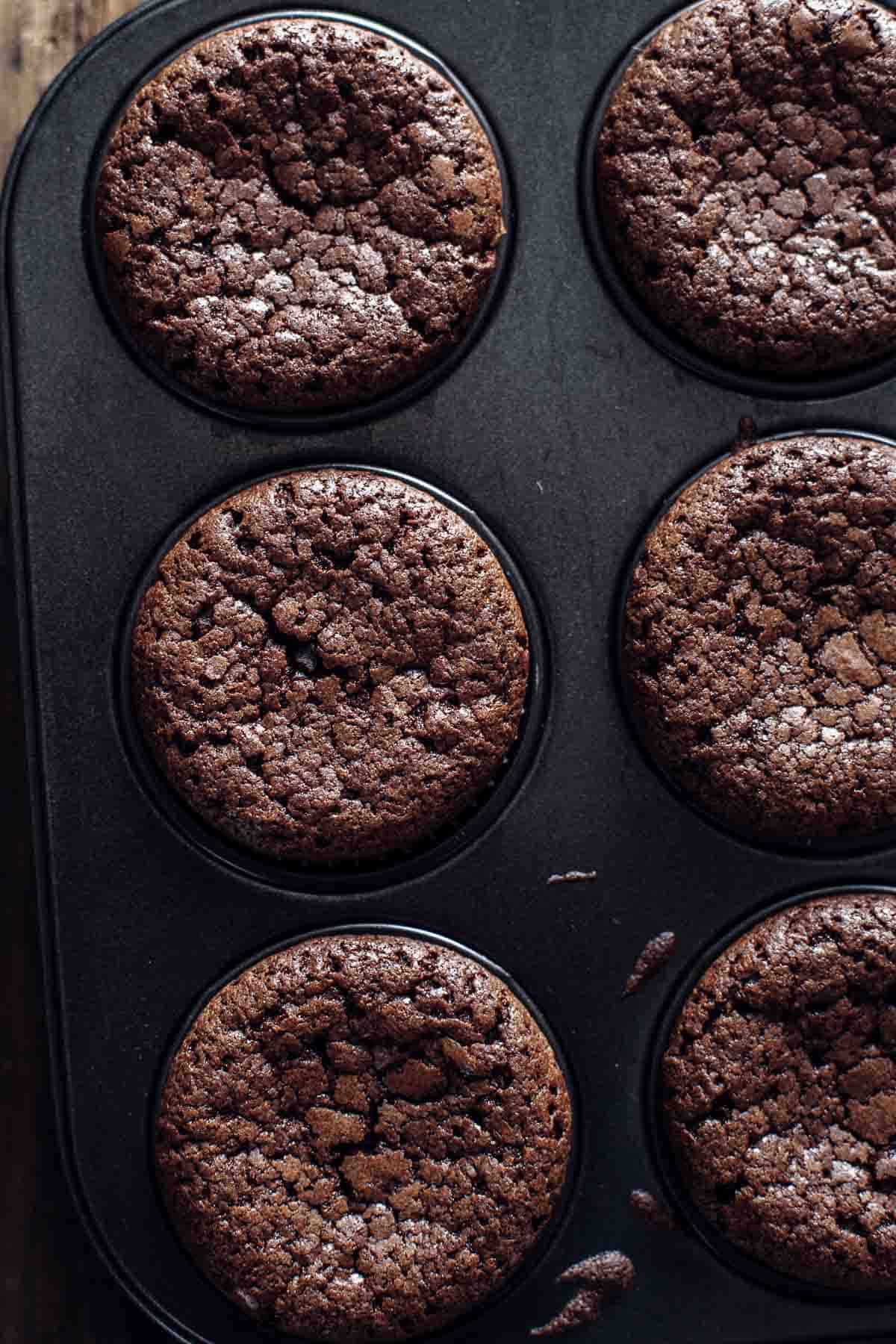 Here you see the consistency of the buttercream: 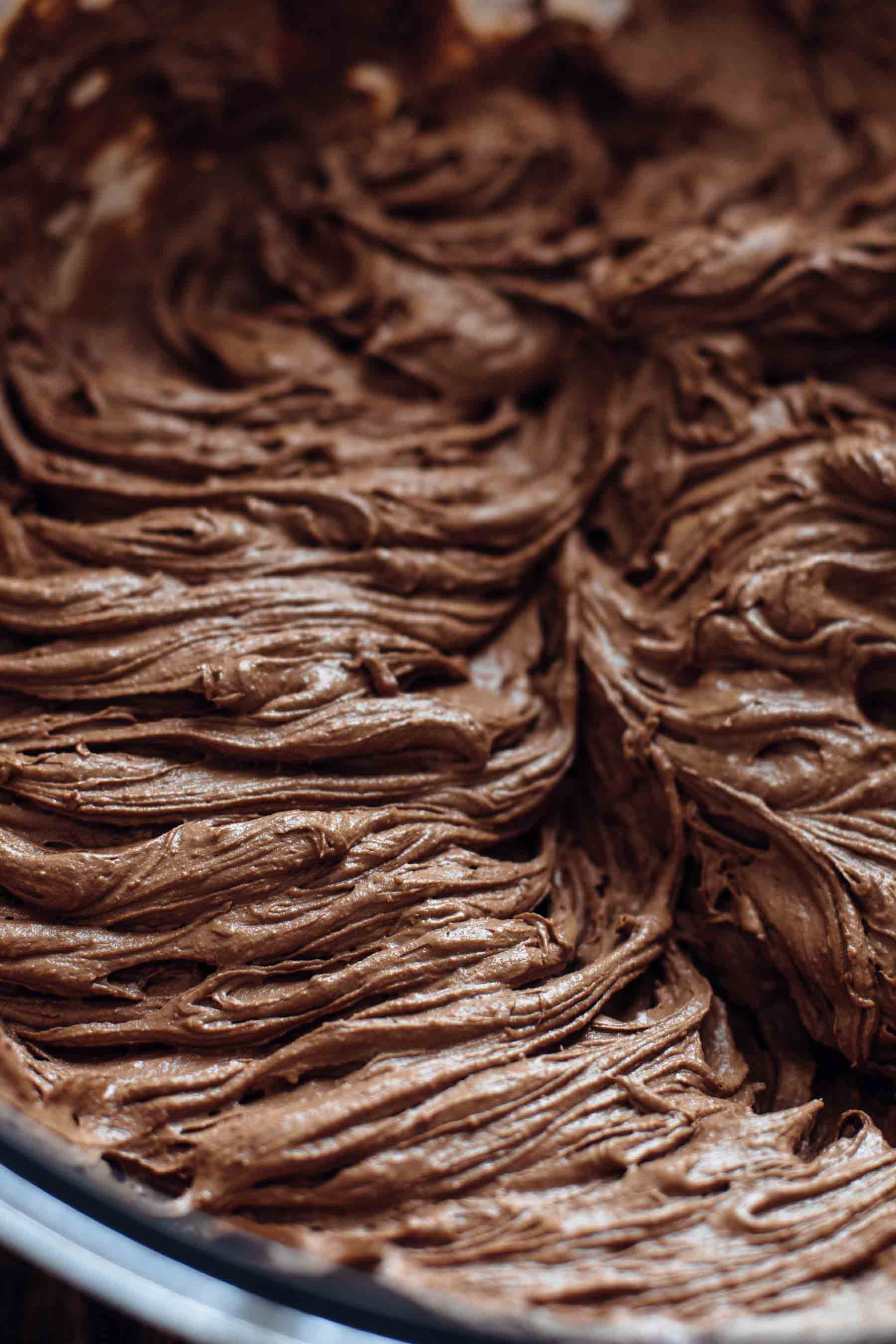 There are different theories about the better moisturizer. Is it butter or oil? Both butter and oil brownie cupcakes have their raving fans.

In general, oil leads to fudgier and denser texture in baking goods compared to butter. On the other hand, butter adds a deep, buttery taste to baking goods.

I like both but find the butter suits this recipe better. Due to a lot of recipe testing, I perfected this recipe over years. Trust me, these cupcakes are as fudgy as they were made with oil but we have the big advantage of the deep and rich flavor the butter.

Well, that’s the next hard question, isn’t it? You will find recipes with melted dark chocolate, with cocoa, or a combination of both.

It depends on how you want them to be. Cakey, chewy, or fudgy? Of course, not just the chocolate is responsible for these textures but it is a very strong contributing part of it.

Adding cocoa powder is in most cases my personal favorite. It provides a rich and deep chocolate flavor. Adding melted chocolate instead of cocoa would require adding a lot of melted chocolate to reach the same intense chocolaty flavor.

When choosing cocoa instead of chocolate you need to add more butter. So brownie cupcake recipes with melted chocolate usually contain less butter than those made with cocoa.

The key to super fudgy cupcakes is to follow the instructions step by step. There are a few golden rules to follow.

Now, let’s chat about the buttercream. Oh, my word. So delicious! It has a great chocolate taste and is so silky and creamy that it’s almost unbelievable.

To get super creamy and fluffy buttercream, let the butter come to room temperature. Then mix it until it is super creamy. Then add powdered sugar. Mix again until it's creamy. Beat in chocolate and cocoa and mix until the buttercream is super fluffy.

You can pipe or spread the frosting on top of your cupcakes. It’s up to you. 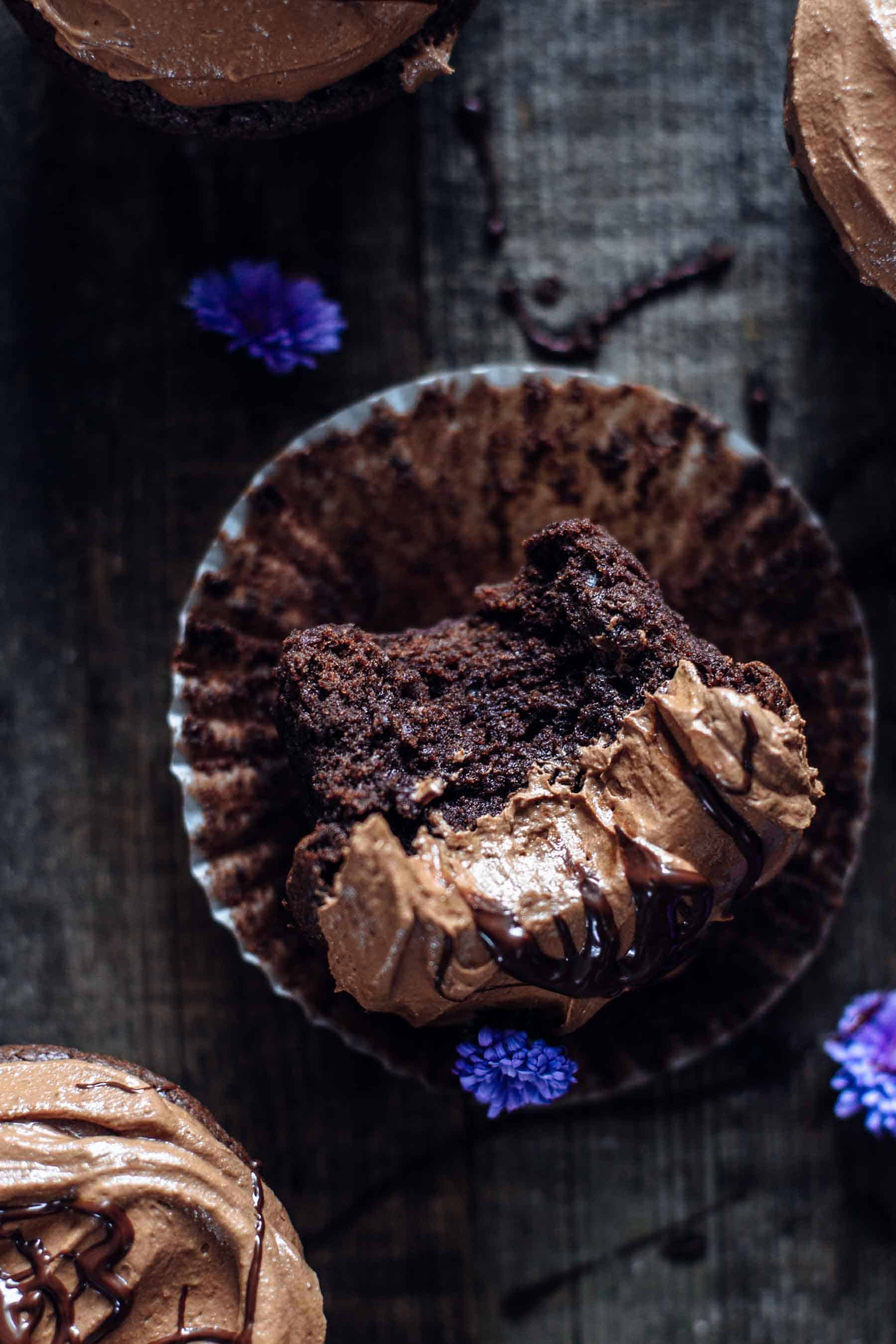 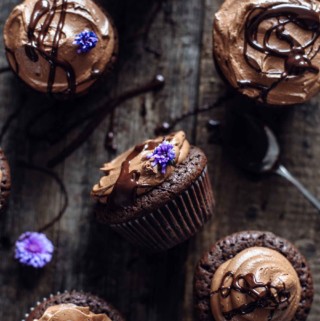