Do you know that making Spanish Flan is an easy process and requires just 4 ingredients? This is an original Spanish Flan recipe and is fully translated into English and calculated in cups and grams. 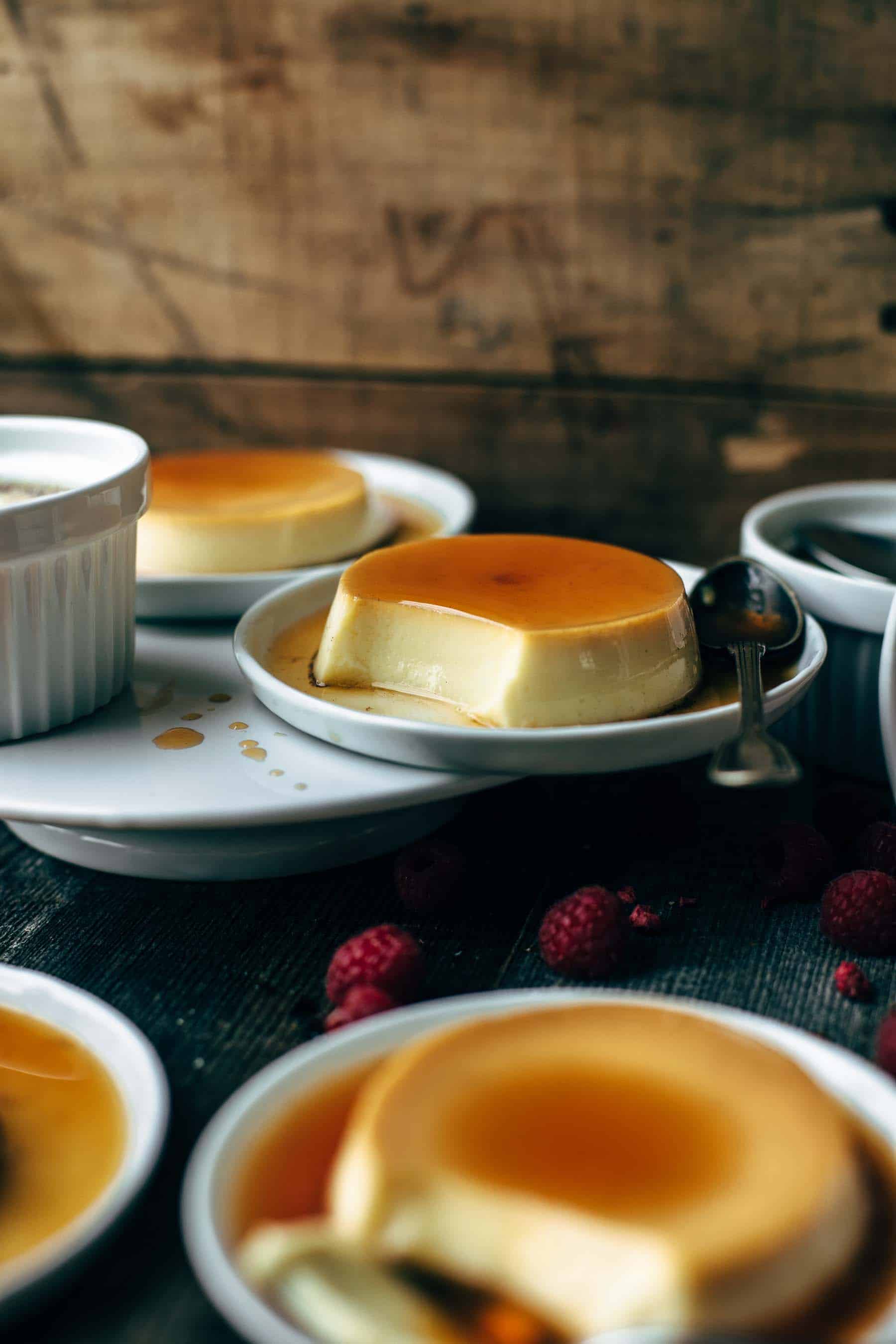 Spanish Flan is something very special. The consistency of Flan is like pudding, or jelly, or custard. Yes, I think it's more like a custard. It is firm that it holds its stand, but after you put it into your mouth, it literally melts between your tongue and the roof of your mouth.

Then, cook the sugar syrup.

Therefore cook sugar over medium-low heat until completely liquefied and golden brown in color. This is the most time-consuming part of making this Spanish Flan recipe.

The cooking will take about 10-15 minutes.

Stir constantly and remove from heat immediately when it is liquefied and has the described color. The sugar burns very quickly, so don't cook it too long.

Then spoon into the warmed ramekins quickly. You will notice that the sugar is getting VERY, VERY quick hard while spooning. The best is when you place the baking dish with the ramekins next to the stove where you cook the sugar. Then spoon sugar syrup into the first ramekin until the bottom is covered (about 1-2 tbsp).

TIP: If necessary, place the saucepan back on the heat for a few seconds to liquefy the sugar again. Repeat with the other 5 ramekins until you run out of sugar syrup. Then set aside until you are done with the flan. 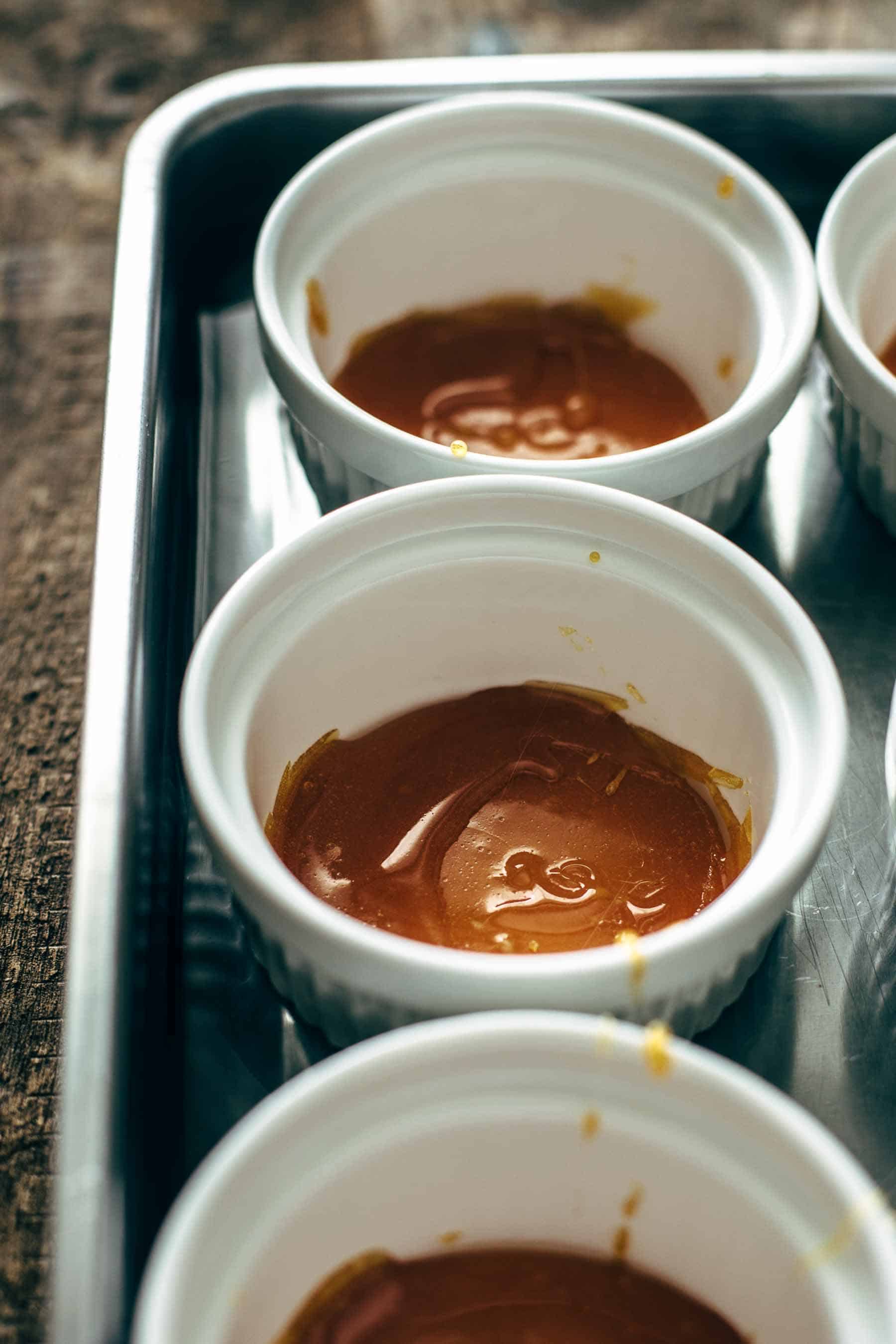 The majority of the work is done. Now, it's time to make the flan.

Mix eggs and sugar until creamy for about 3 minutes. Then add milk and bourbon vanilla. Mix to combine. Then pour through a mesh strainer to remove the most of the air bubbles.

Then divide into the 6 ramekins. Cover each ramekin with aluminum foil separately.

Cook in the water bath, also called bain-marie, for about 60-70 minutes. Check one ramekin after 60 minutes by looking under the foil. It should jiggle when moving like jelly or pudding. Don't overbake. Check back every few minutes if not done after 60 minutes.

Then remove from the water bath and let cool to room temperature. Afterward, refrigerate for at least 4 hours or overnight.

After chilling and before serving, run a knife around the sides where the flan is connected to the ramekins. Then place a plate on top and flip over the plate. Then slightly shake the ramekin that the flan is falling on the plate. Watch the video above to see how I did it.

The sugar syrup will run over the flan.

Don't scratch out the hard sugar crust from the ramekins to put it on top of the flan.

For easier cleaning, fill ramekins with hot water from the tap and let them stand until the hard sugar crust is dissolved.

Store leftover flan in the ramekins and remove them just before serving. It will stay fresh in the fridge for up to 1 day.

If you make this Spanish Flan recipe, leave a comment, rate it and tag a photo #alsothecrumbsplease on Instagram! Would love to see your snap! 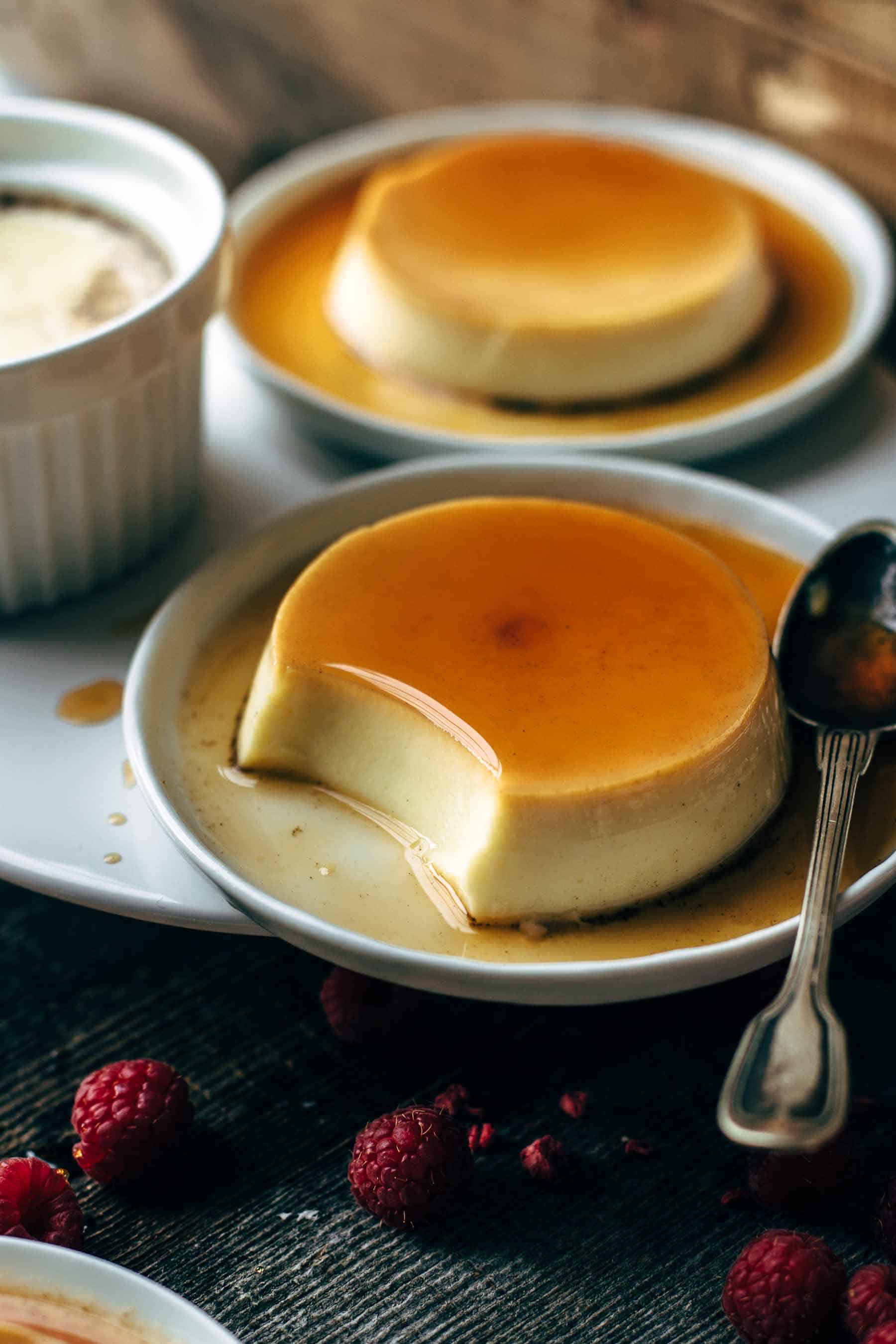 *First, cut off the straight end of the vanilla bean. Then place the tip of your knife below the curled end and cut the vanilla bean through the middle of the bean lengthwise with a sharp knife. Although you don't need to cut it all the way through, it's ok when you do so. Then open the vanilla bean and scrape out the flavorful seeds with the back of your knife. Just use the seeds.