THIS is the most fudgiest and best Peanut Butter Brownies recipe you will find on earth. Super fudgy chocolate brownies with a salty peanut butter swirl. 12 ingredients and 10 minutes preparation time.

May I summarize the key points for today very quickly before we head into the recipe?

Alright, let's head into the delicious world of the best ever Peanut Butter Brownies.

The brownie batter is the same batter from my Homemade Brownie Recipe From Scratch. Even though I thought is not possible to top this brownies recipe, I found out it is possible.

Combining this super delicious brownie batter with peanut butter is next level.

The brownie batter is straight-forward and a 1-bowl-recipe. It is irrelevant which cocoa powder you use. You can go for natural cocoa powder or dutch-processed.

Because brownies need to be fudgy and dense instead of light and fluffy, there is no baking soda or baking powder in the batter. Baking soda reacts with natural cocoa and baking powder with dutch-processed.

I used dutch-processed cocoa powder. As you can see, it is very dark in color and has a strong chocolatey taste. It's this kind of cocoa powder what is used in Oreo cookies.

Randomly spoon dollops of brownie batter and peanut butter into a 9x13" pan. These Peanut Butter Brownies will be about 3/4 inch thick, almost 1 inch.

Please read my 11 tips for perfect fudge brownies here. These are 11 golden rules you should know and follow to have the best possible brownies experience.

Do not overbake the brownies or you end up with super delicious cake squares instead of brownies. When you follow the instructions carefully, you are going to have super fudgy Peanut Butter Brownies.

See the picture below.

Do you see that extremely fudgy center? You can do it!!

Before serving sprinkle with a pinch of coarse salt. Trust me. You will like it!

Brownies are one of the best desserts existing. There is no doubt. But which brownie recipe would you love to see next? Maybe brownies with a caramel swirl? Or with hazelnuts and Nutella? Tell me in the comments below.

If you try this Peanut Butter Brownies recipe leave a comment, rate it and tag a photo #alsothecrumbsplease on Instagram! Would love to see your snap!

My name is Sabine. I'm a passionate baker and cookbook author. You find here sweet desserts made from scratch. About me → 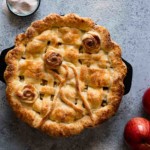 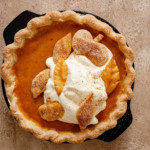 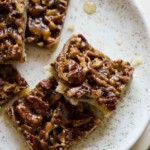 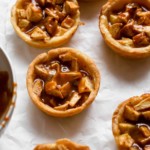 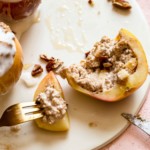