This donuts Recipe is easy to make. Oven-baked yeast donuts are healthier than fried ones. Just 182 calories each donut! Filled with coconut cream and glazed with coconut glaze. Just 45 minutes of rising time. Soft and airy. 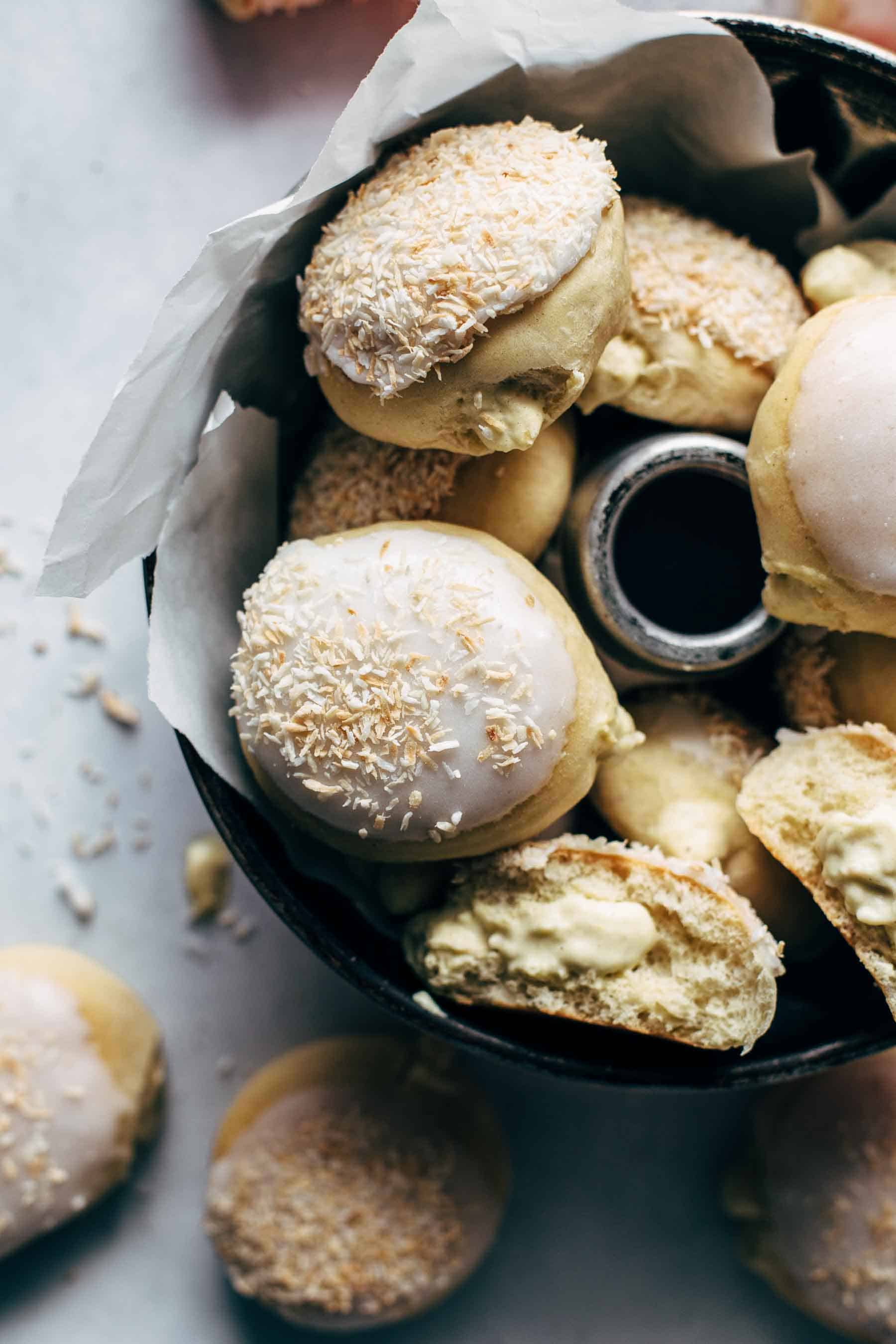 These donuts are regular yeast donuts which you could fry in oil, but they are baked in the oven. A lot of baked donuts are cake donuts which are also delicious but technically seen just a piece of cake in a donut shape.

The advantage of baked donuts is that they are less in calories because you save the calories of the oil in which donuts are usually fried. Just 182 calories each donut! 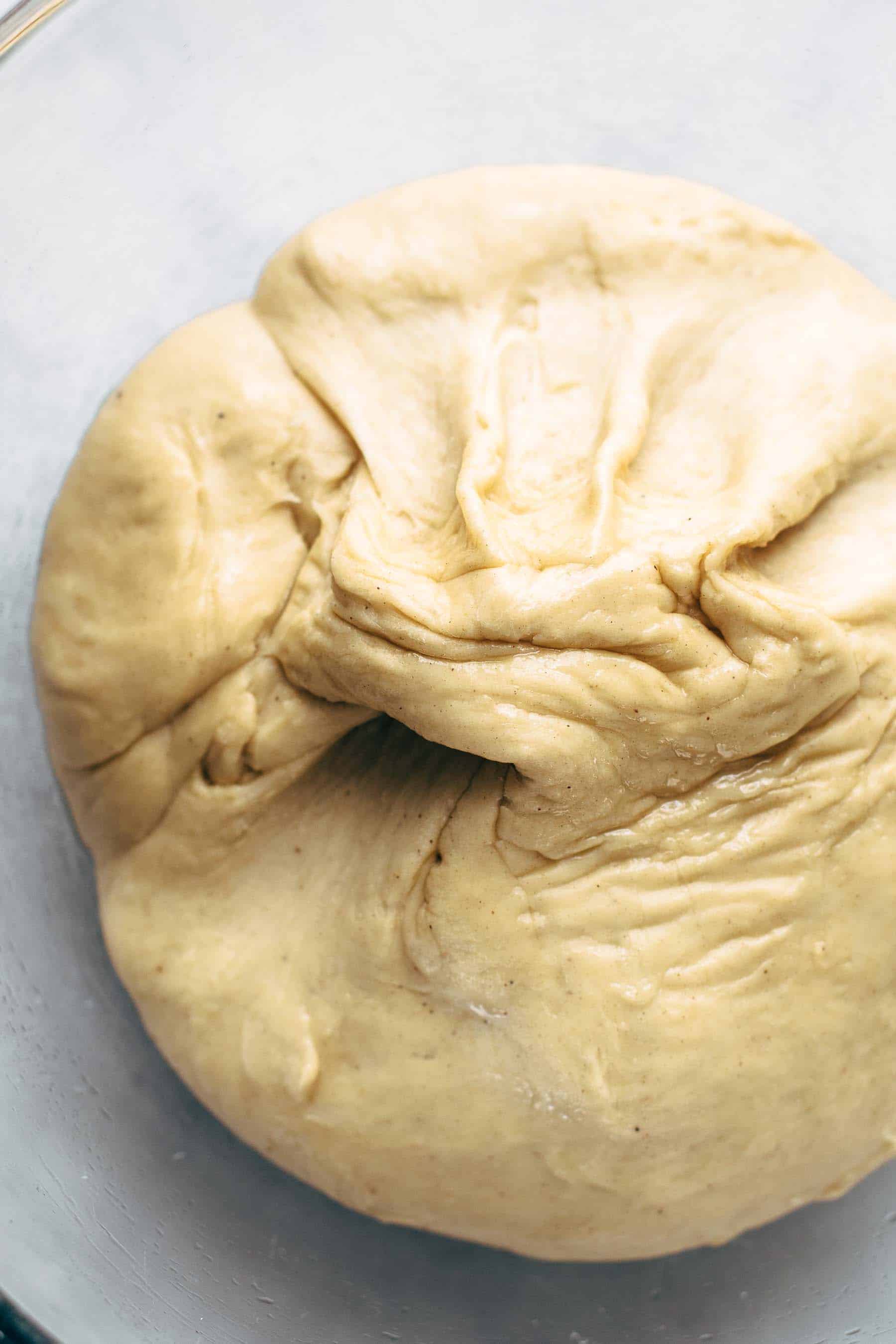 To get the best results use a stand mixer to make the dough. Start with combining lukewarm milk, sugar, and yeast in the mixing bowl. Let sit for about 5-10 minutes until it gets foamy on the surface. Add eggs, melted butter, vanilla, and salt. Stir to combine.

Then add flour and attach a dough hook. Knead for about 5 minutes until the dough doesn't stick to the bowl anymore. Resist the urge to add more flour as needed. The dough should be sticky to touch.

Transfer dough to a lightly greased bowl and grease the top of the dough. Let rise for about 15 minutes in the preheated oven (see recipe instructions below).

On a lightly floured surface roll out the dough, a ½ inch thick. Take as less flour as possible. Just enough to roll the dough without any problems. Cut out donuts with a floured 3-inch donut cutter.  Place on 2-3 baking sheets and let rise for another 30 minutes in the preheated oven. 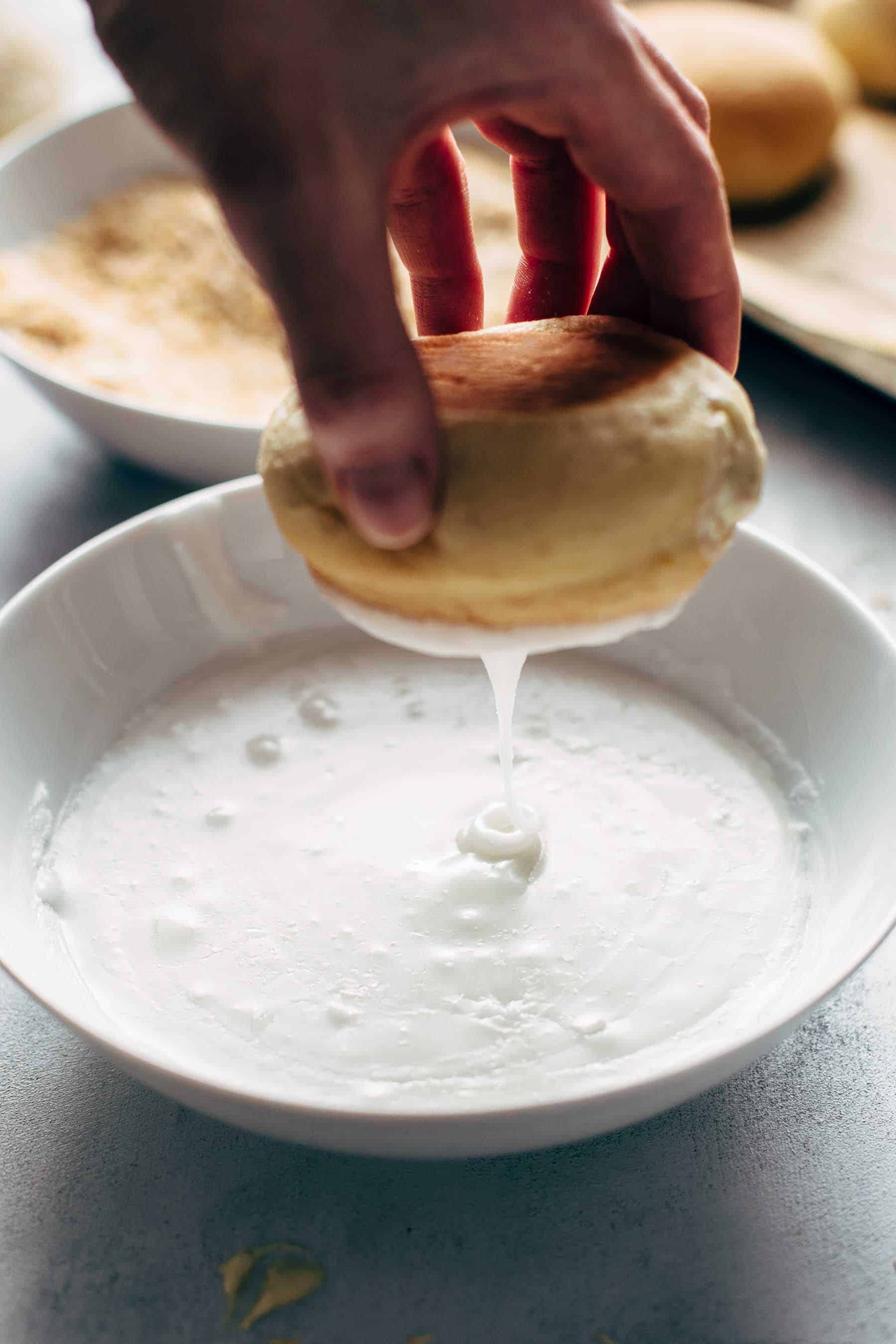 The filling is super creamy because of the whipped cream which you fold into the chilled coconut cream.

Fill cooled donuts with the coconut cream, then dip the tops of the donuts into the glaze and sprinkle with coconut flakes. They are best eaten fresh on the same day. 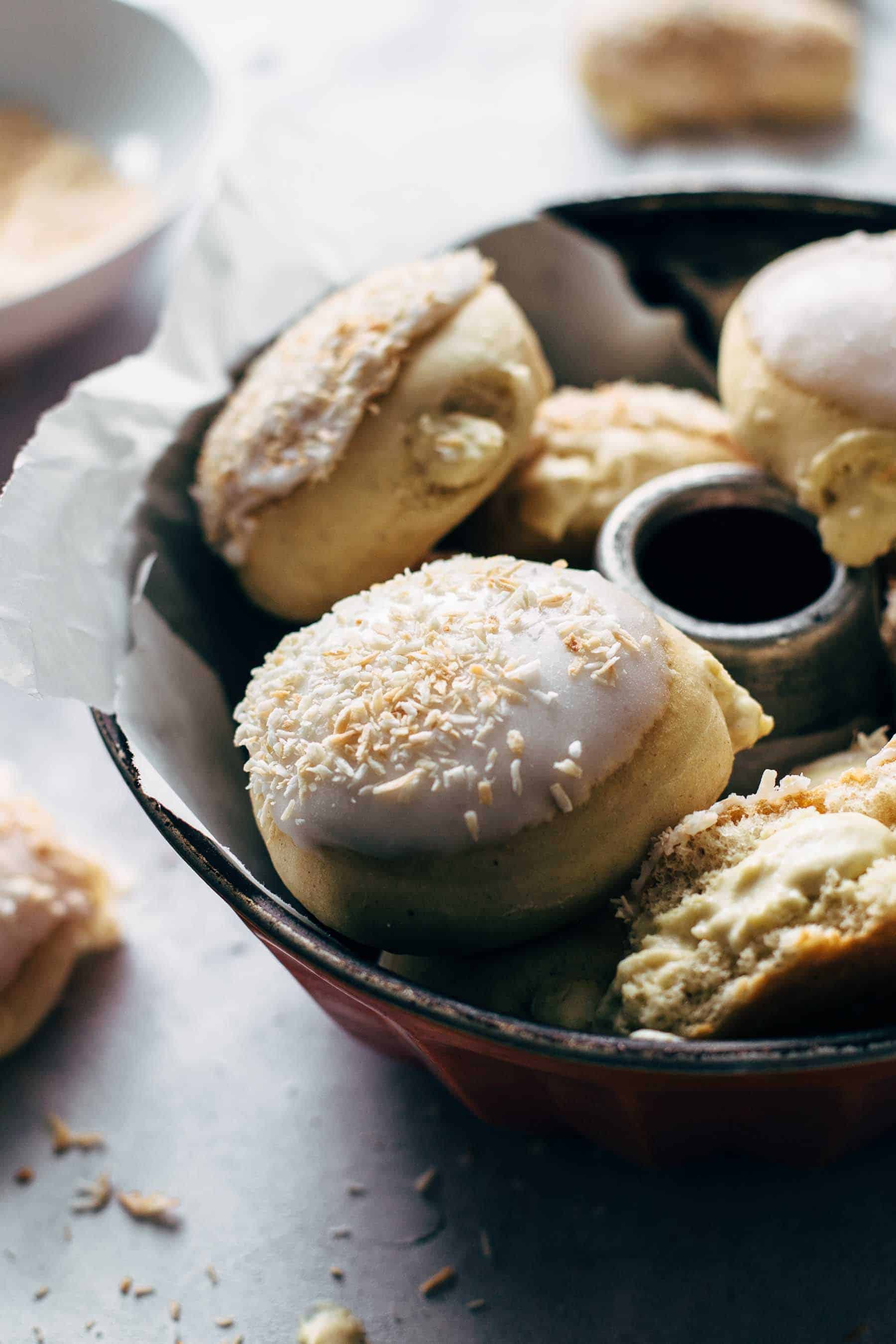 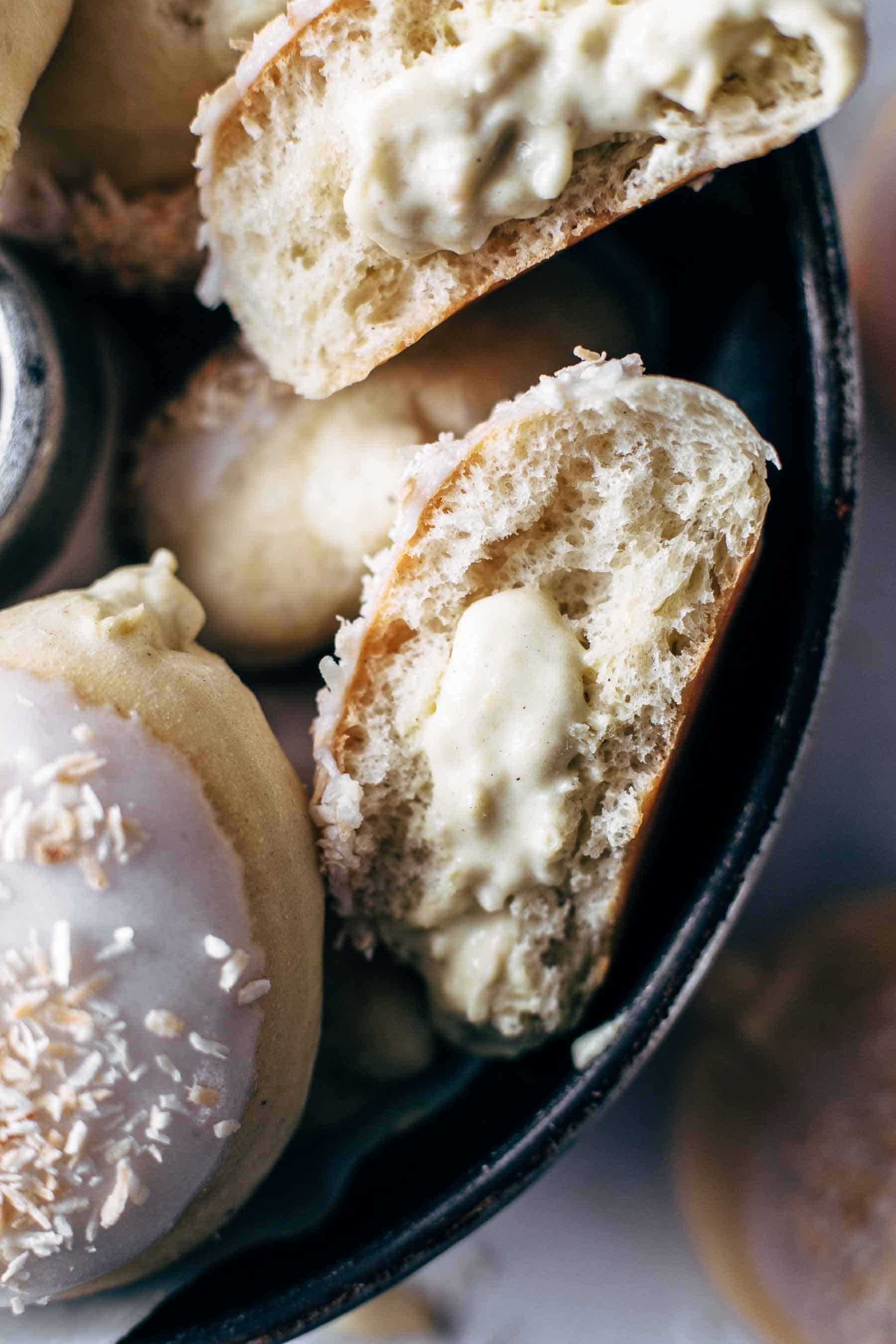 You may also like Cinnamon Challah Bread, Chocolate Red Velvet Donuts, or Beignets. 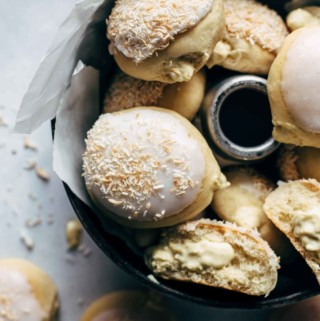 *First, cut off the straight end of the vanilla bean. Then place the tip of your sharp knife below the curled end and cut the vanilla bean through the middle of the bean lengthwise. Although you don't need to cut it all the way through, it's ok when you do so. Then open the vanilla bean and scrape out the flavorful seeds with the back of your knife. Then just use the seeds.

Hi, my name is Sabine Venier! I’m a cookbook author and food blogger. Here on Also The Crumbs Please you will find my collection of treasured family recipes.