These Homemade Glazed Doughnuts are fluffy, soft, and a doughnut-lovers dream. Just 11 ingredients and completely made from scratch. With simple trick just 45 minutes rising time. Watch detailed step-by-step photos and video to see how to make fluffy fried donuts. 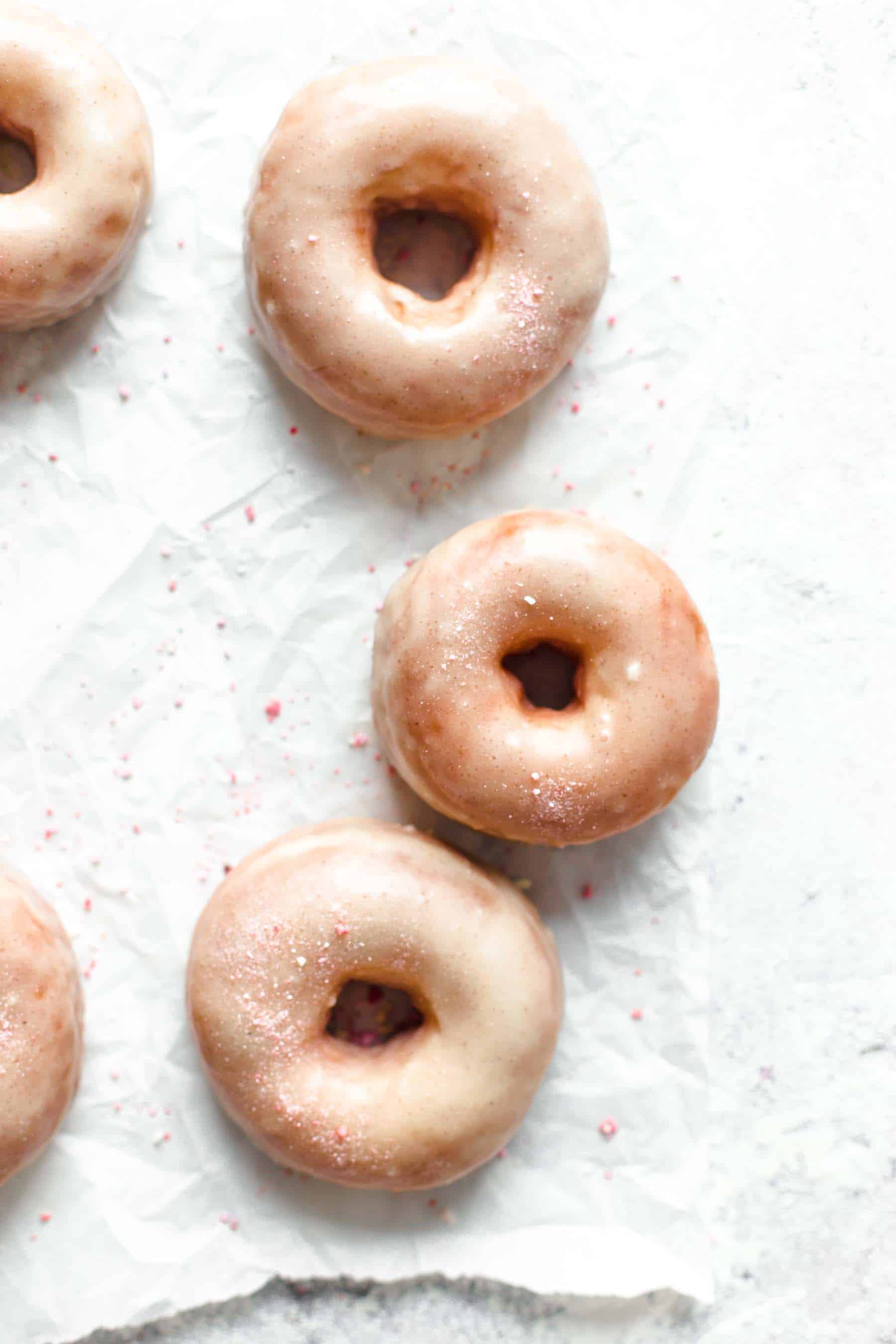 What you will learn:

How to make donuts from scratch

Have you ever wondered how to make fluffy donuts from scratch? Frying doughnuts at home is not as hard as you might think. You need just a couple of basic ingredients and thanks to the detailed step-by-step tutorial, you will end up with addictively and super fluffy glazed donuts.

Let's start with combining lukewarm milk, sugar, and active dry yeast. The easiest way to make the dough is to use a stand mixer attached with a whisk attachment which is later replaced by a dough hook. Make sure that the milk is warm to touch but not hot. If the milk is hot, it kills the yeast, and the donuts won't rise at all. I warm mine for about 20-30 seconds in the microwave. Depending on your microwave you may need to warm it longer or shorter. 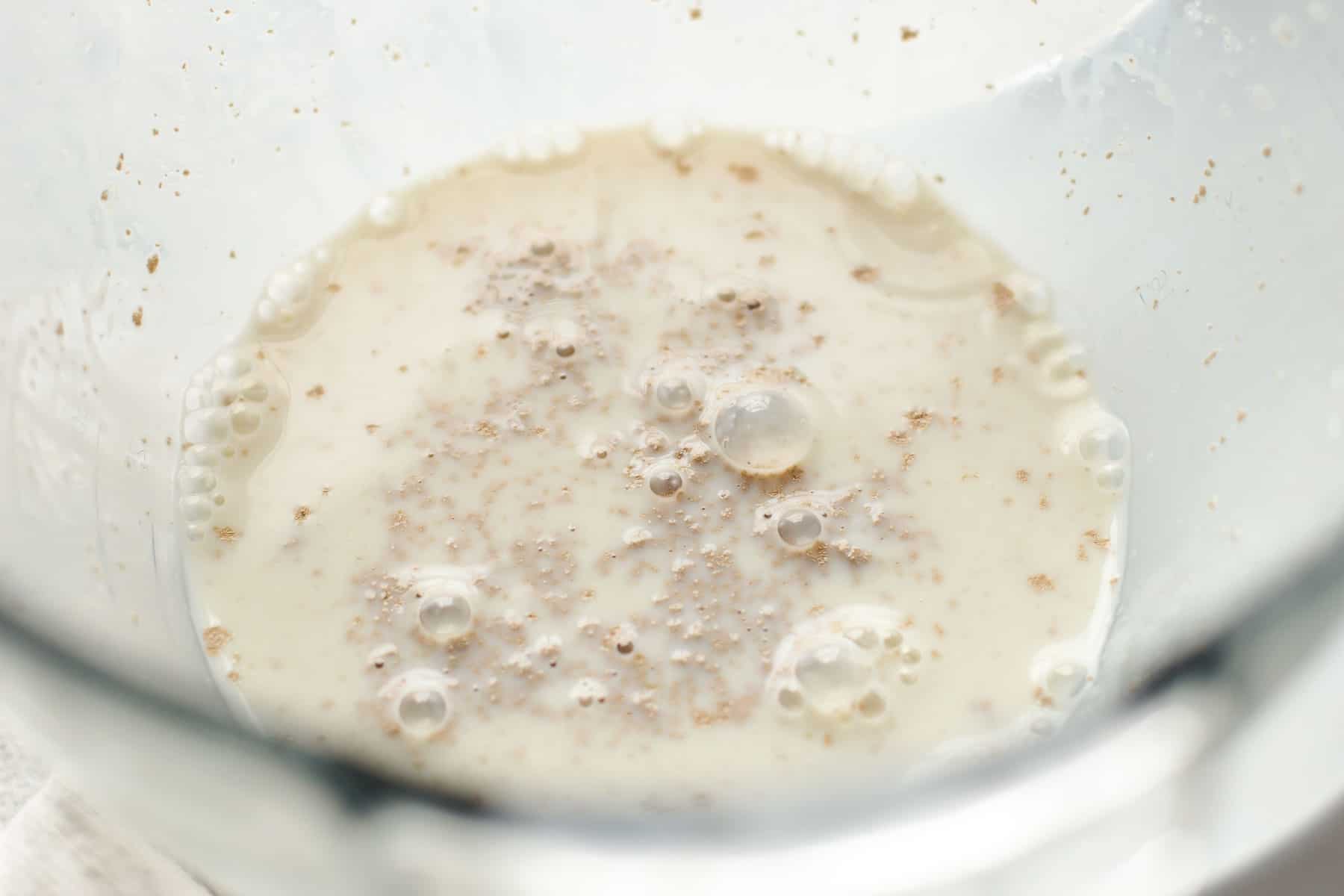 Let stand for 5-10 minutes until the yeast gets foamy on the surface. This is also the test to see if your yeast is still active or already dead. If nothing happens after 10 minutes, your yeast is most likely too old. In this case, stop here, buy new yeast and start again from the beginning. It's not worth proceeding with dead yeast because your donuts won't rise. And who wants to eat donuts which are not fluffy? 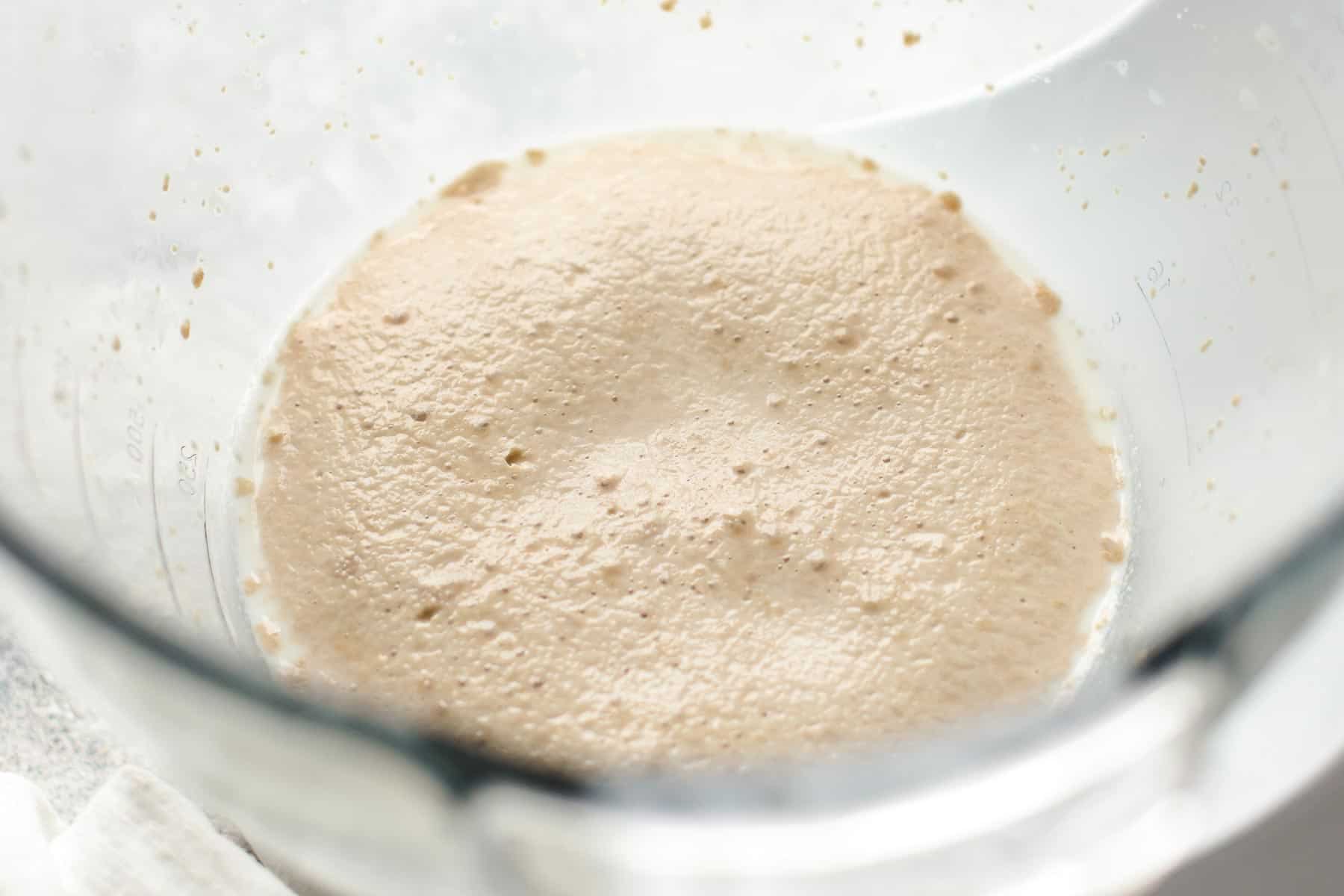 Then add eggs, melted butter, and salt and whisk to combine. 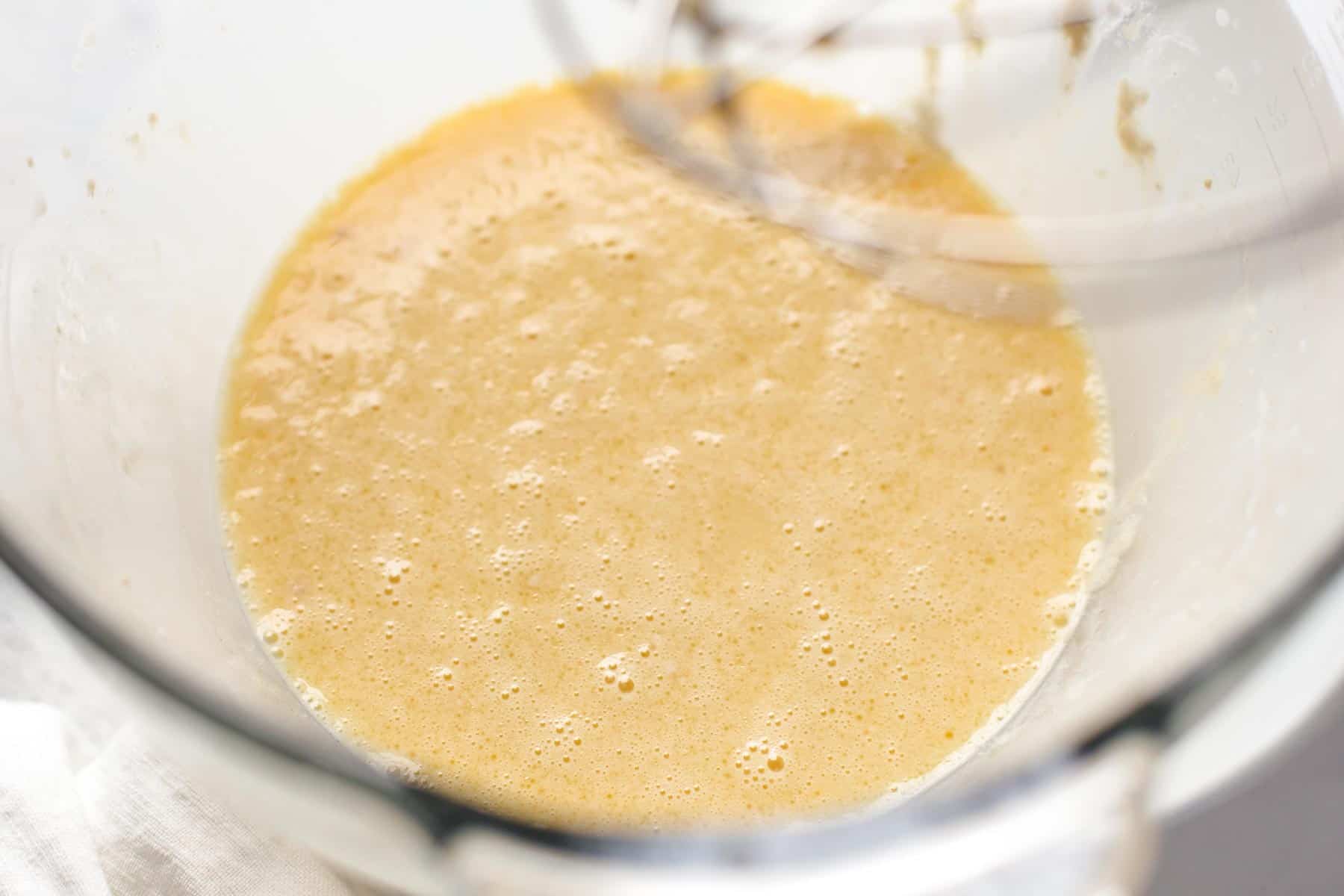 Replace whisk attachment with dough hook and add the flour. Start with 3+¾ cups of flour and knead dough for 4-5 minutes on medium-high speed that it comes together. If you use measuring cups instead of a kitchen scale, spoon and level the flour. Always! 1 cup packed flour equals 1+½ cups spooned and leveled flour. Too much flour makes your donuts dry. 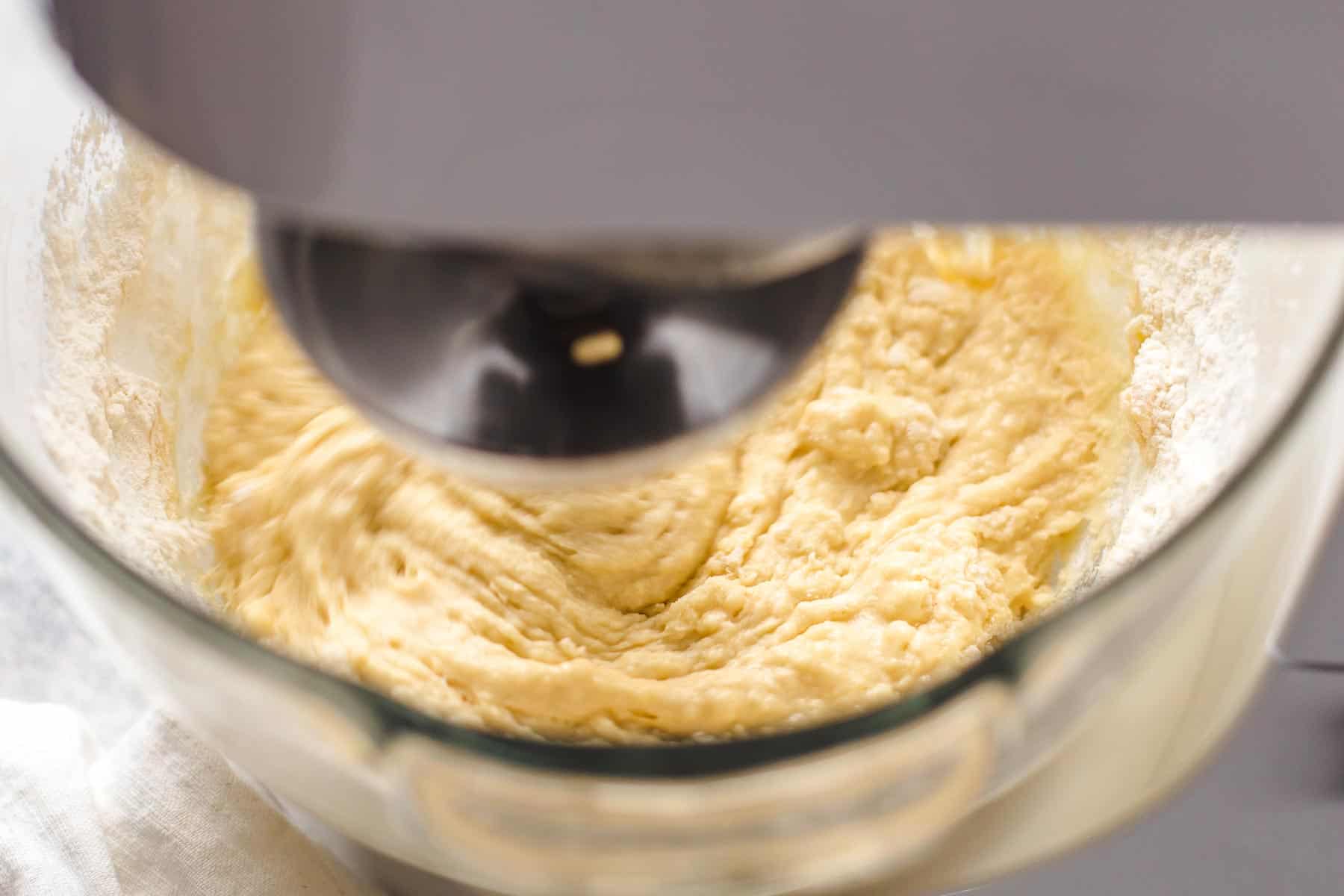 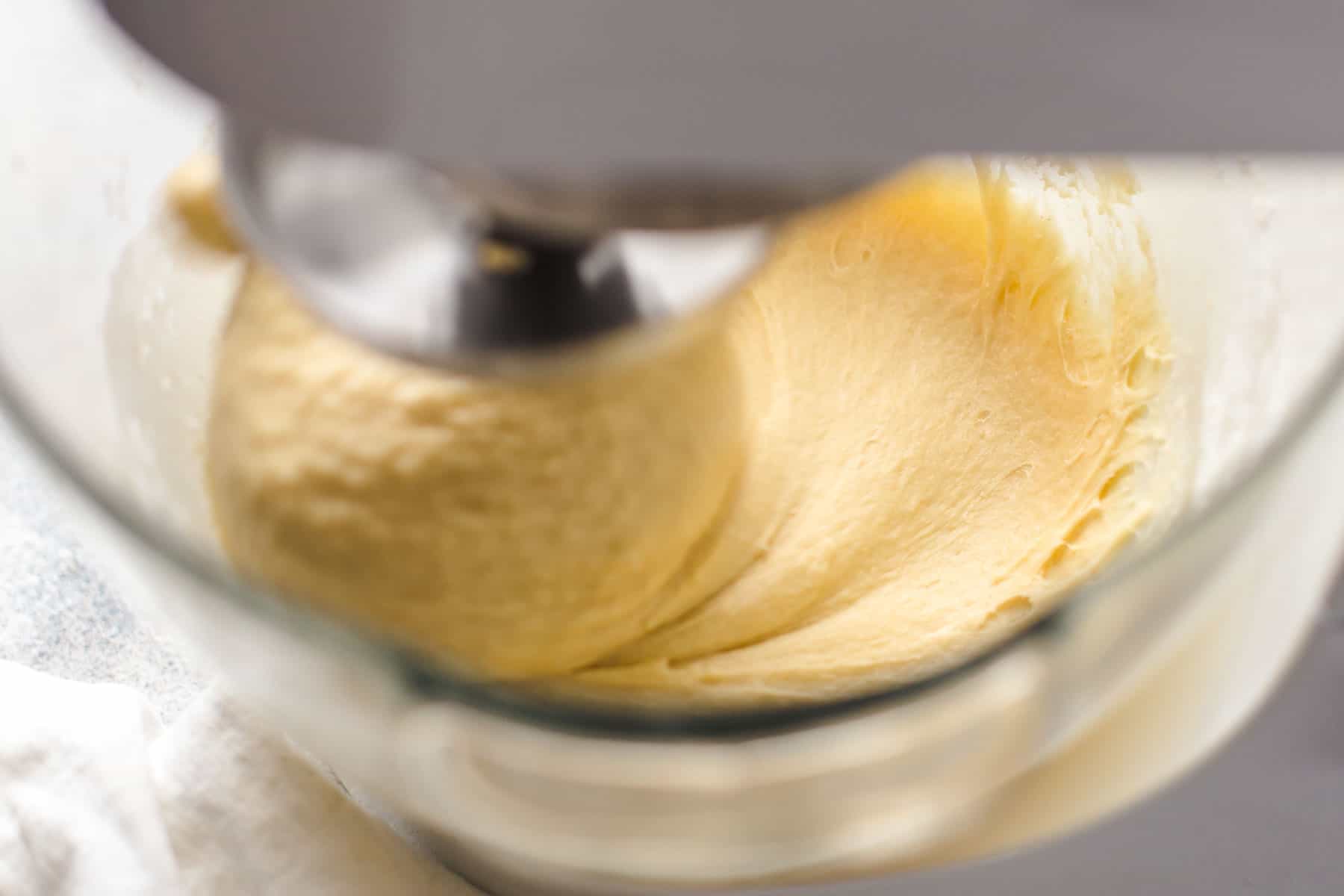 Then knead another 5-10 minutes on medium-high speed until the dough doesn't stick to the bowl anymore. It's also time to preheat the oven to 200°F (100°C). 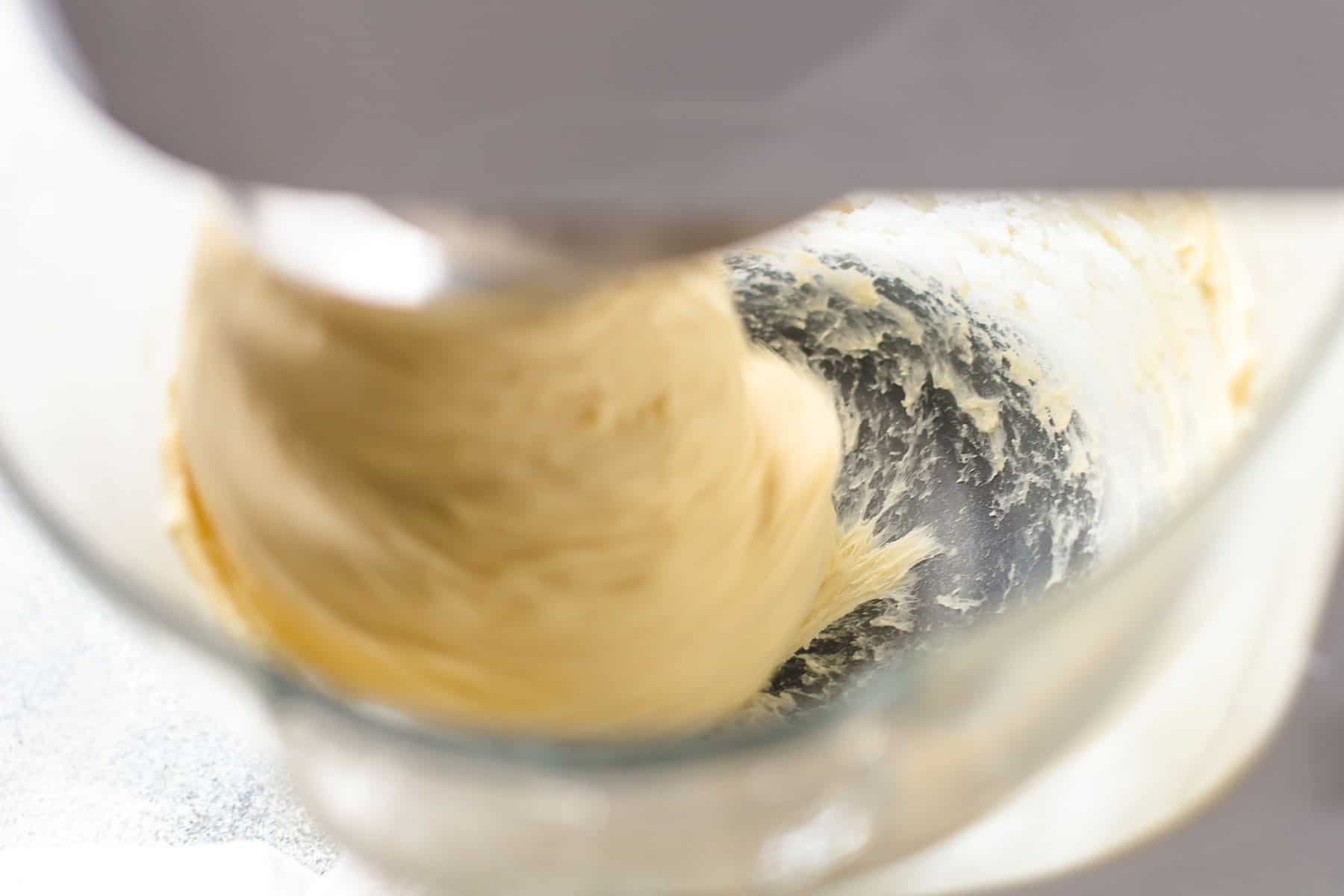 Transfer donut dough to a lightly greased bowl and lightly brush the top of the dough with oil as well. Turn off the oven and place bowl in the preheated oven. Leave the oven door ajar and pinch a wooden spoon. Let rest for 10-15 minutes. 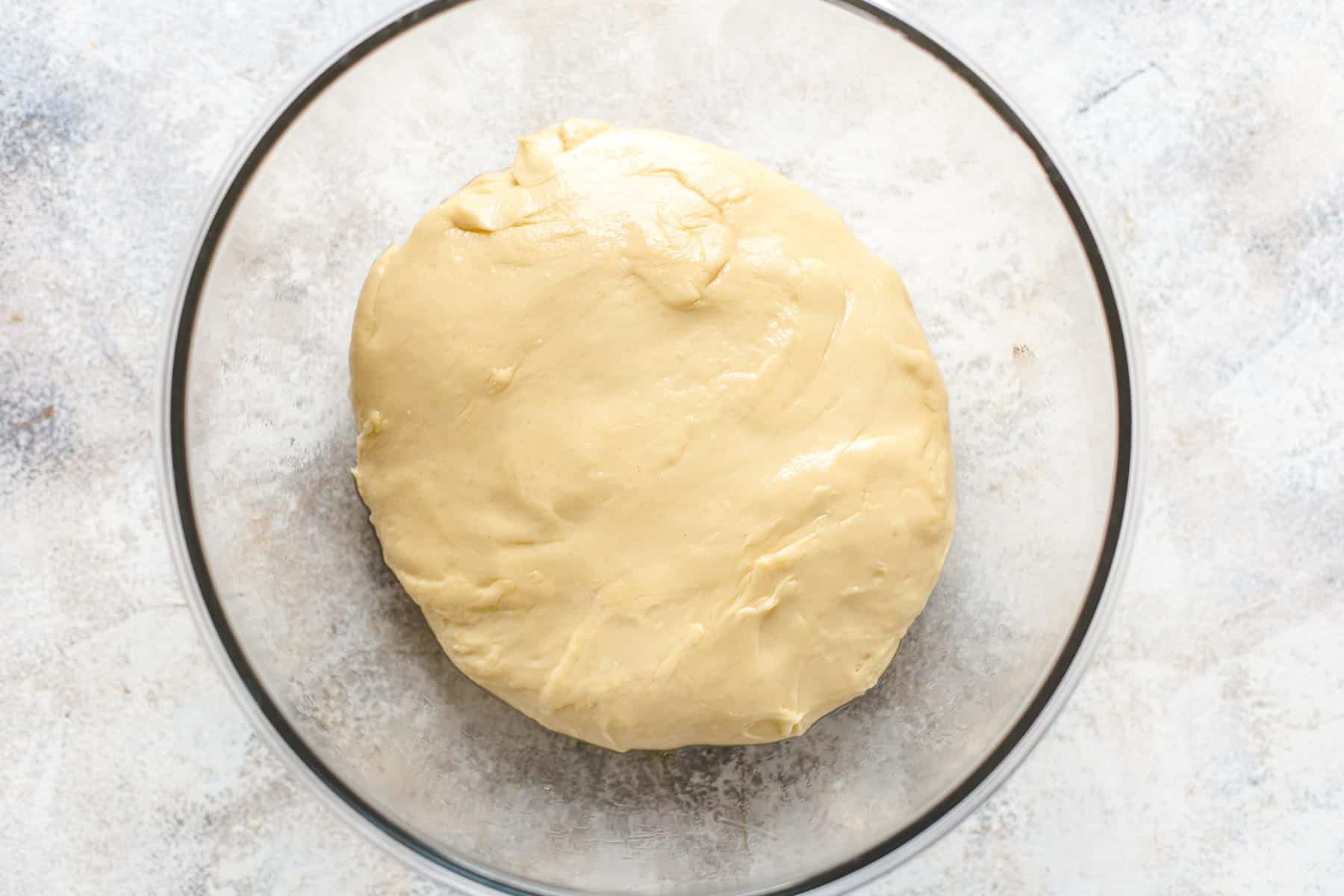 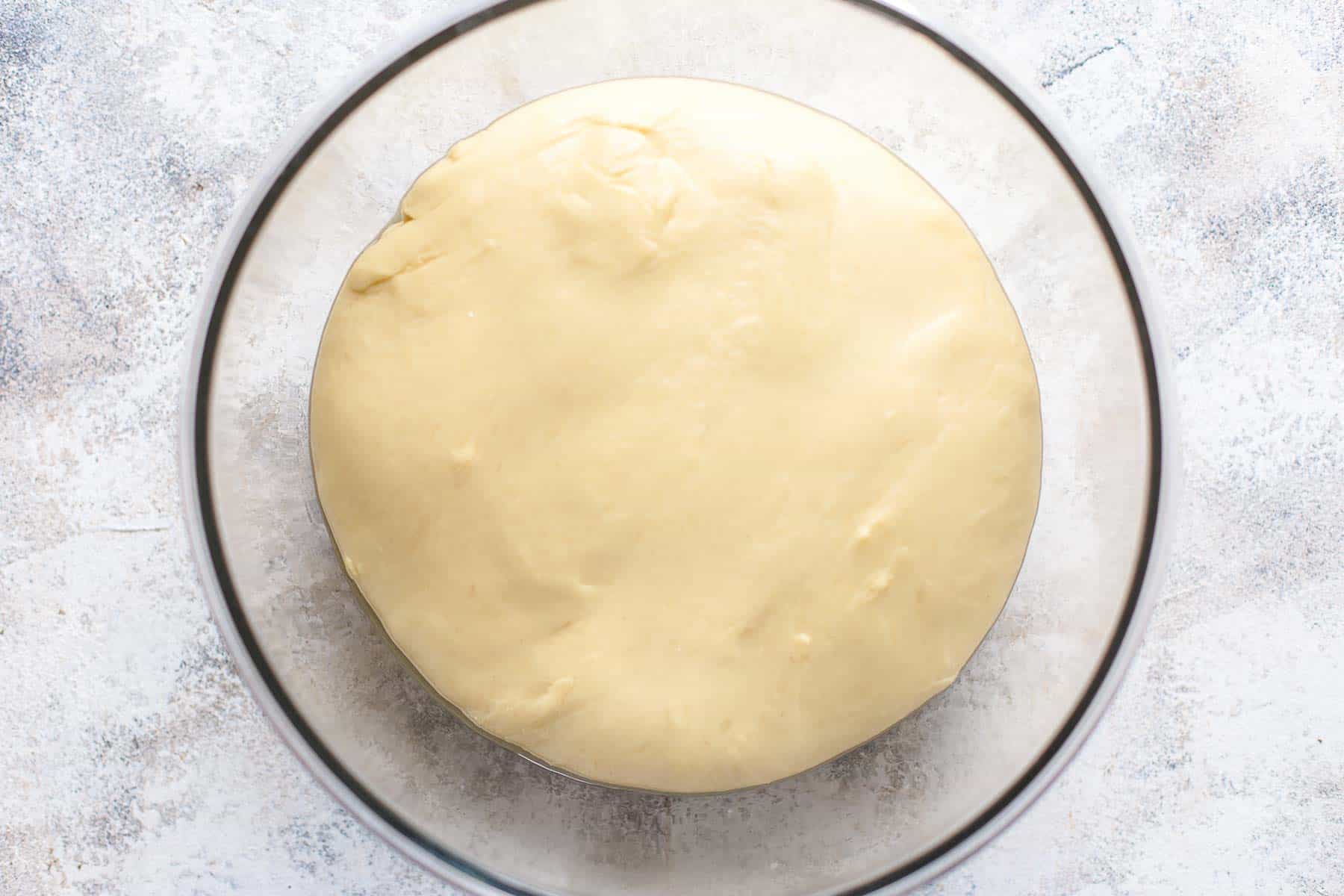 Flour a surface very lightly. Very lightly. Use as little as possible. Then remove the donuts from the oven and preheat again to 200°F. Roll out on the floured surface to a ½ inch (1,2cm) thickness. Lightly flour a 3-inch (7,6cm) donut cutter and cut out donut rings and holes.

Reroll and cut the dough until you run out of dough. Remember, use as little flour for rolling as possible (just that it doesn't stick to the board or rolling pin), or the last couple of donuts you cut will be super dry. You know that you took too much flour when the dough starts to feel like gummy and gets less flexible. 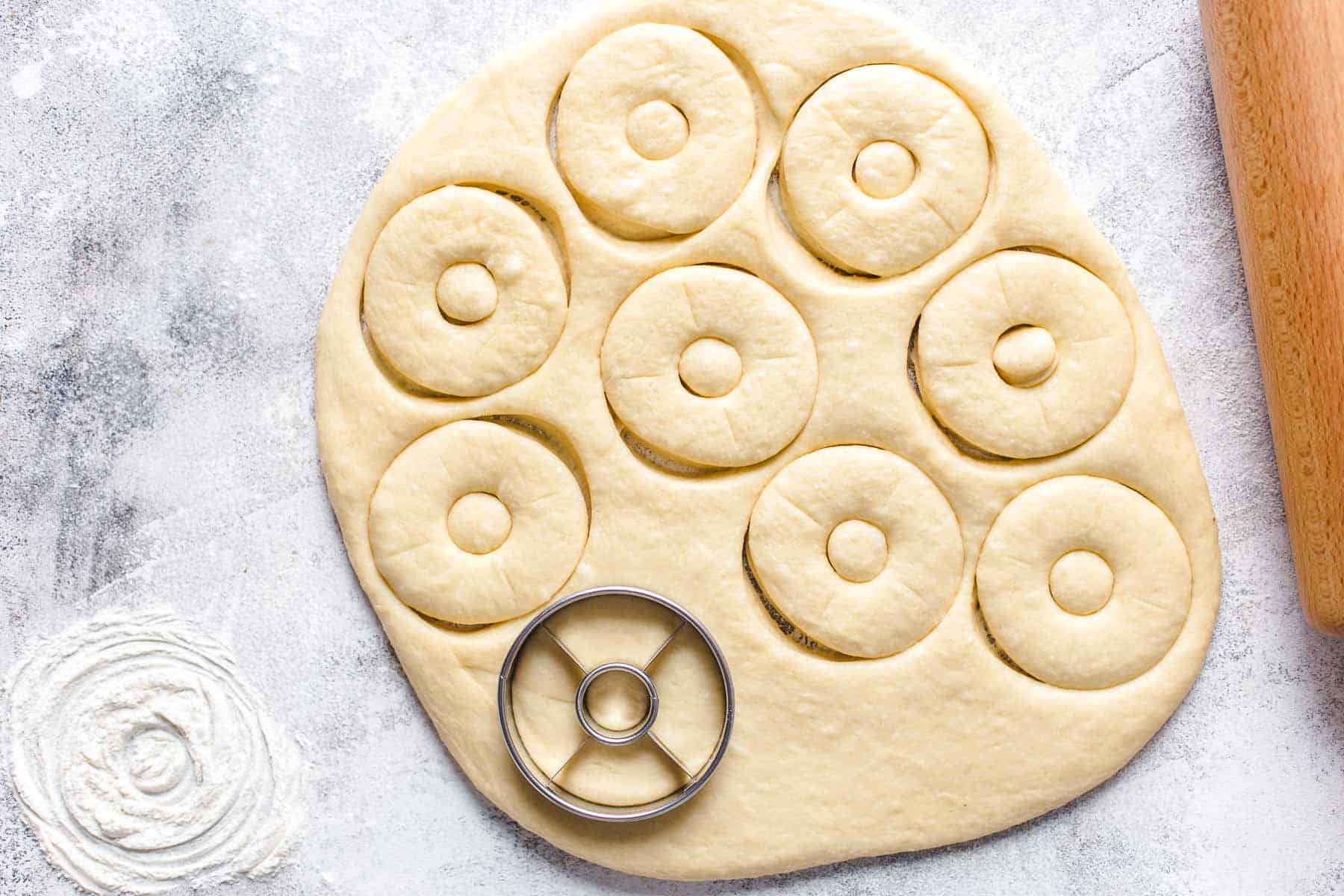 Place donut rings and holes on 3 parchment paper lined baking sheets with about 3-4 inch (7,6-10cm) space in-between. Turn off the oven and place all three baking sheets in the oven. Leave the oven door ajar and pinch a wooden spoon. 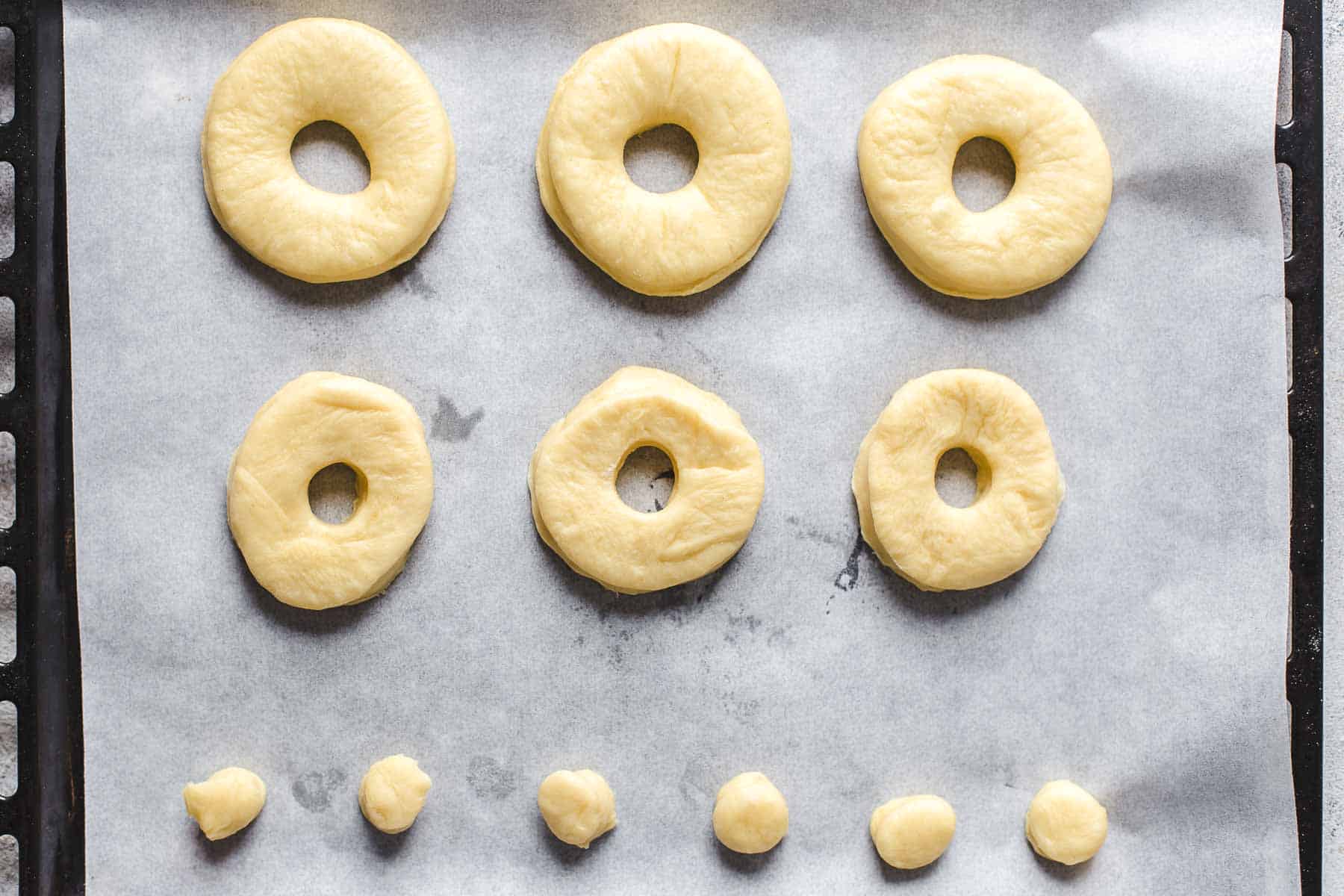 In the meantime heat the frying oil in a heavy-bottomed saucepan or dutch oven. I use grapeseed oil because that's my favorite oil for frying donuts. I tried this cronuts recipe by Dominique Ansel one time, and he uses grapeseeds oil for his cronuts. I found out that this works great for donuts too and never switched to another oil anymore.

The temperature needs to be between 360°F and 370°F (180°C-185°C) constantly. Use a thermometer to check the temperature with every donut you fry. Too cold oil leads to oil-soaked donuts and too hot oil to very dark donuts.

Before you add the donut rings to the oil, carefully widen the holes with the back of a wooden spoon. This is just to have prettier donuts. Transfer them with a spatula to the oil rather than with the hands. If you don't care about almost perfectly round donuts, you can transfer them with your hands as well. As soon as you lift them with fingers, the rings get stretched on one side and end up clunky. 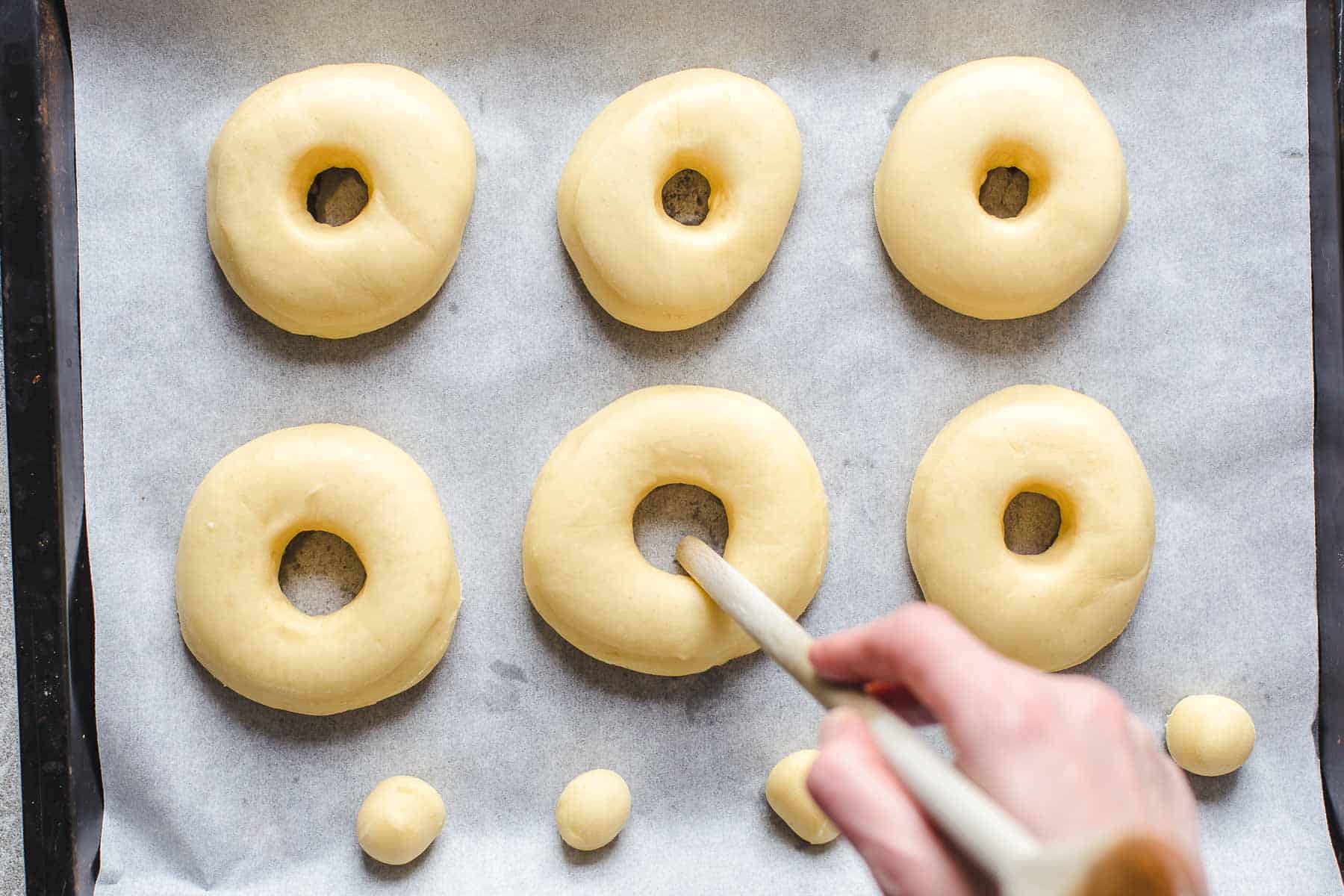 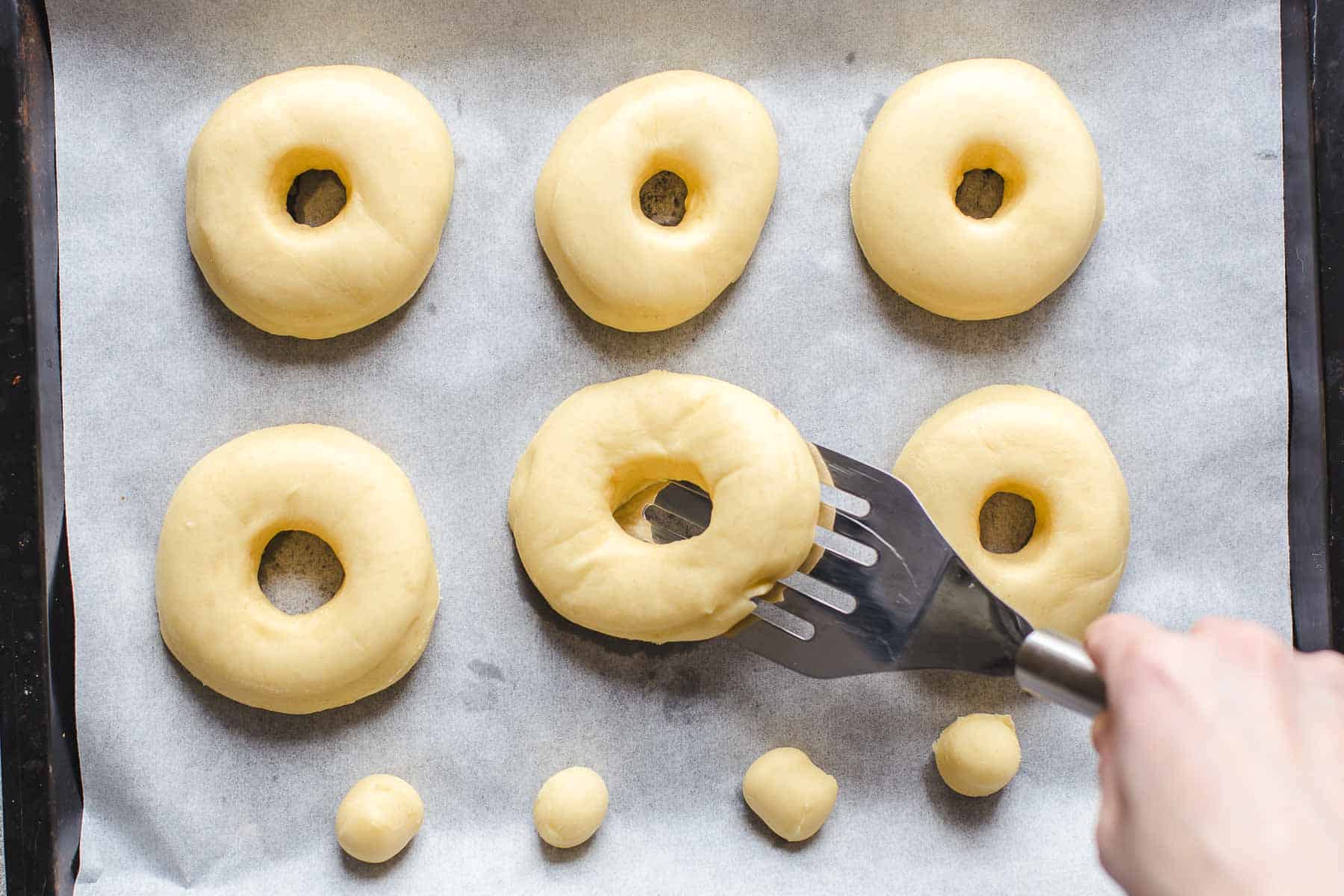 Depending on the size of your pan, fry one or maximum two doughnuts at the time. Fry on each side for 60-90 seconds. Place a stopwatch next to you. 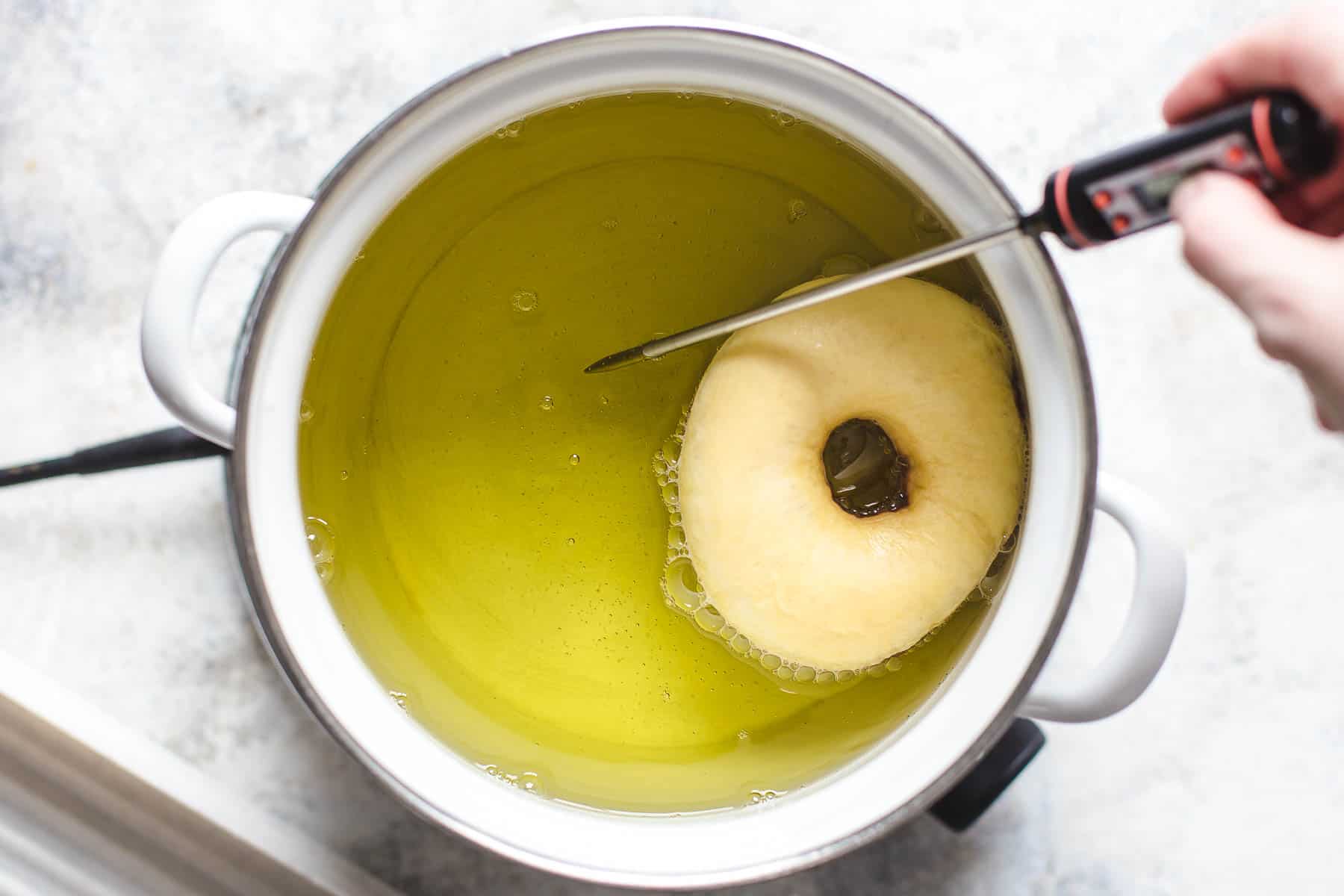 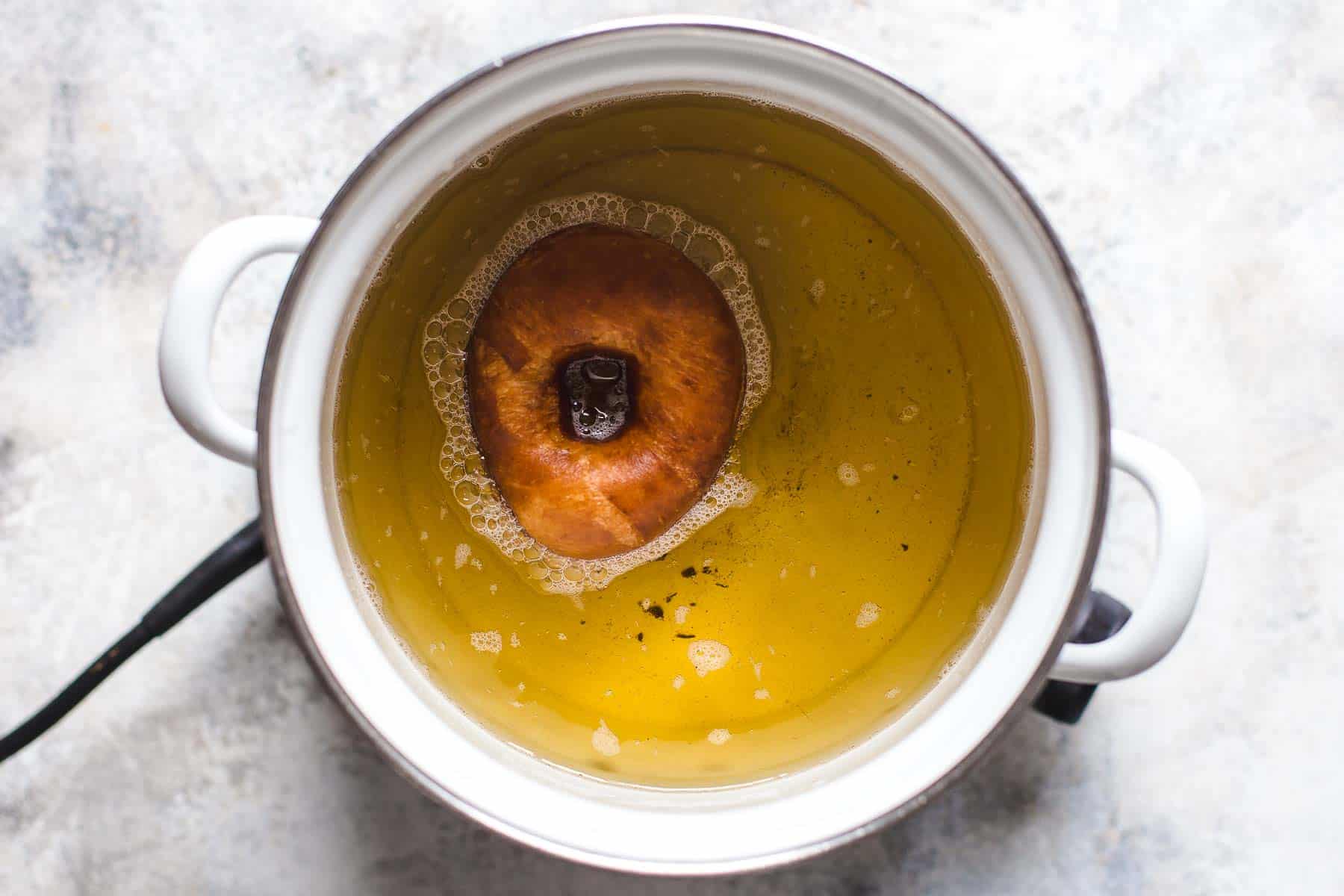 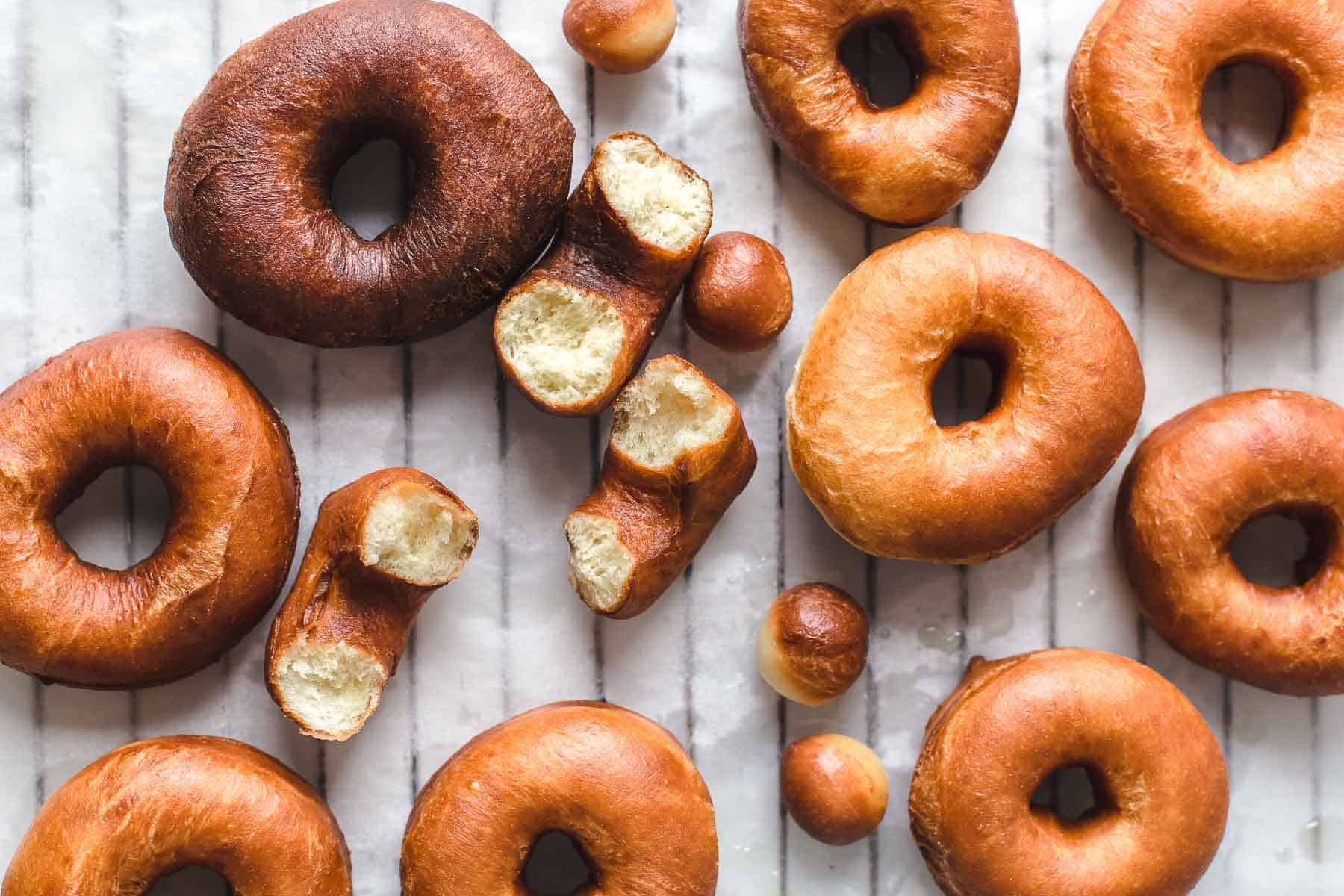 How to make donut holes

I love to make a combination of donut rings and holes. But you could go just with donut holes too with this recipe. Prepare the dough exactly as if you do donut rings as well. Cut out 1-inch (2,5 cm) donut holes and let them rise as described.

Fry a handful of donut holes at the time on each side for 30 seconds. They might be hard to roll to the other side because the fried side tends to look down to the bottom. In this case, carefully push them with the spatula into the oil that they fry from all sides. 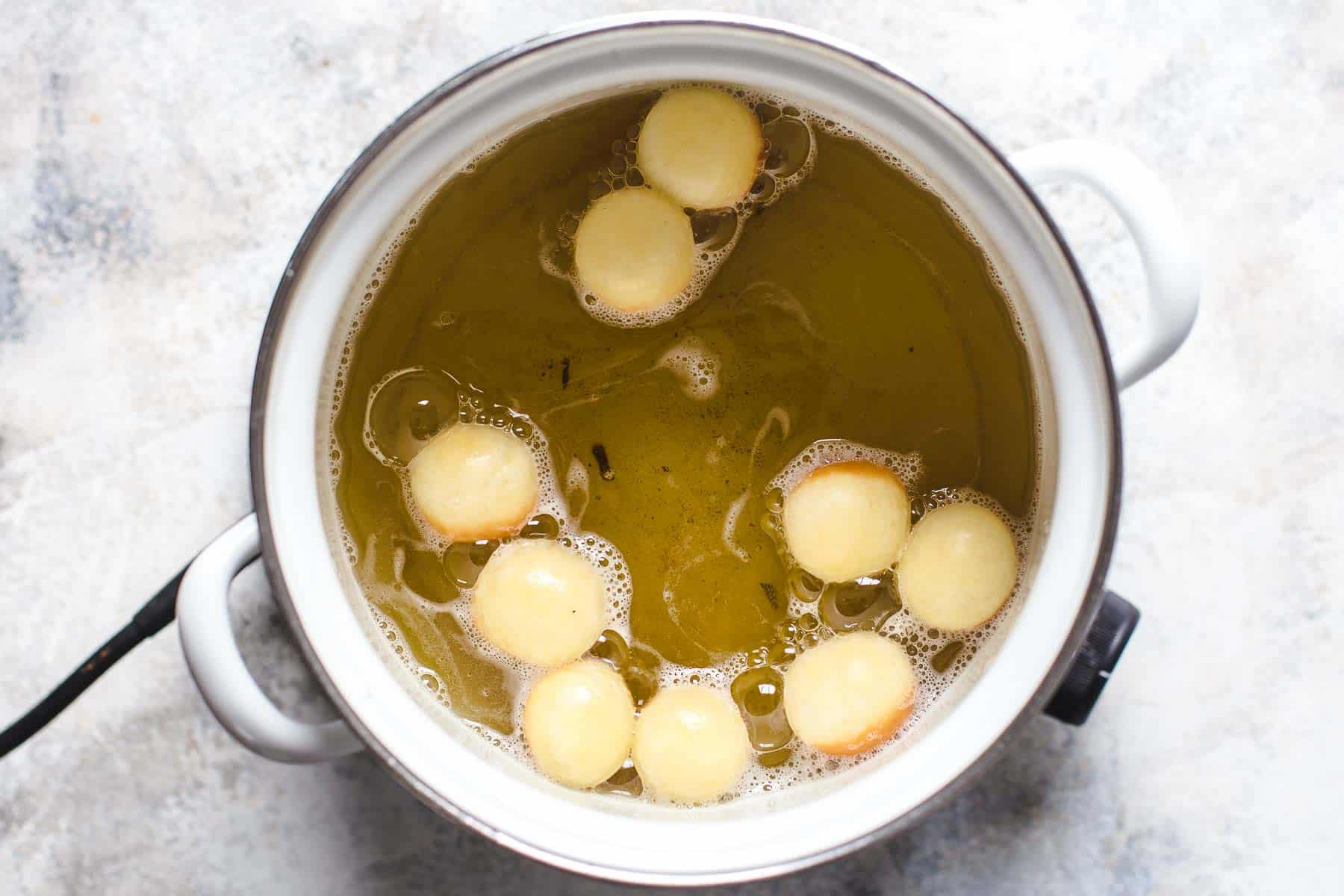 How to make a donut glaze

I don't know about you, but sugar glazed donuts are my favorite. You could make this simple doughnut recipe with any glaze you want. Chocolate, caramel, lemon glaze, you name it or think about a cinnamon sugar coating. That all fits perfectly.

Start with whisking the melted butter, powdered sugar, and vanilla until combined. The texture is very crumbly at this stage. 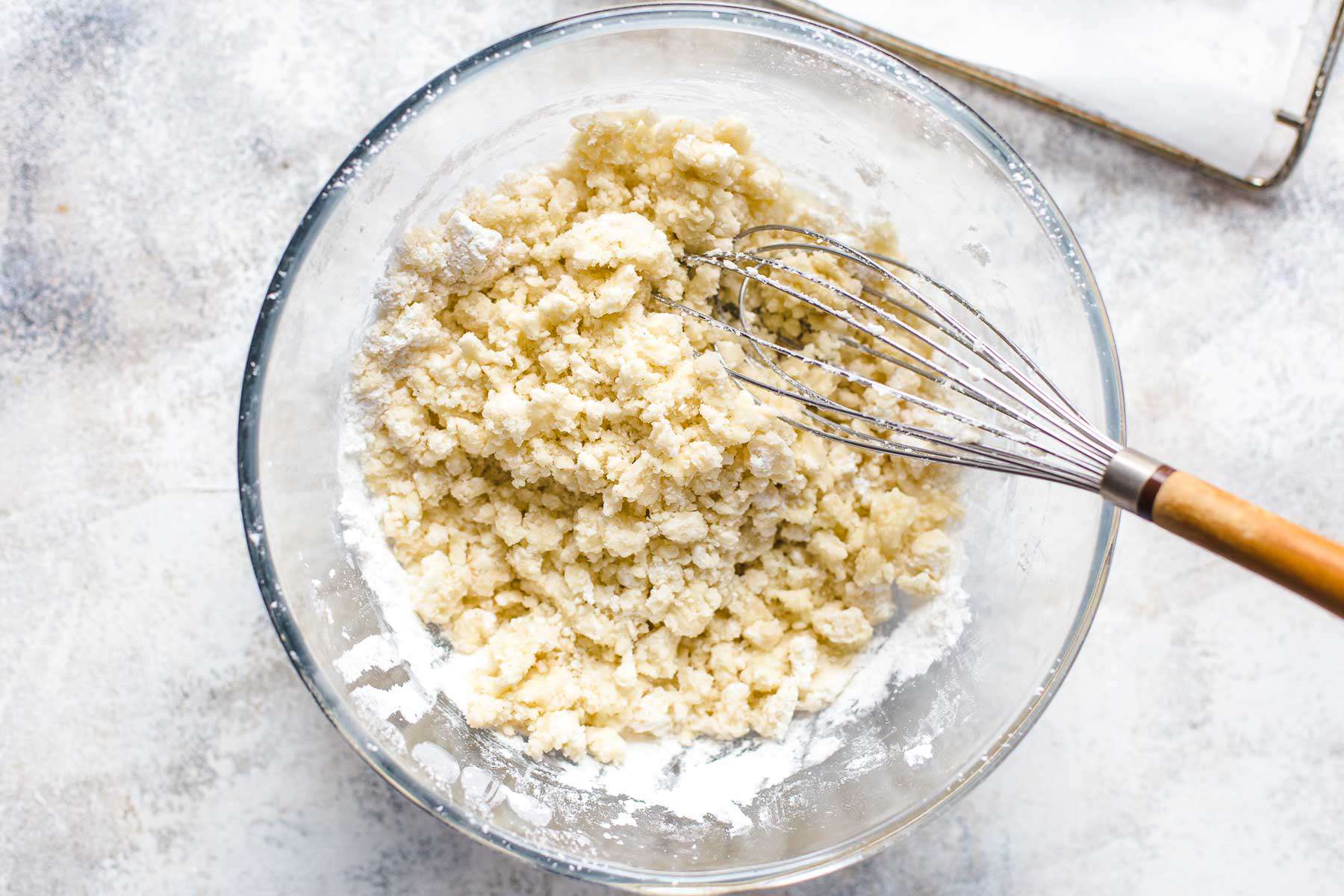 Then add the one tablespoon of hot water at the time and stir to combine. 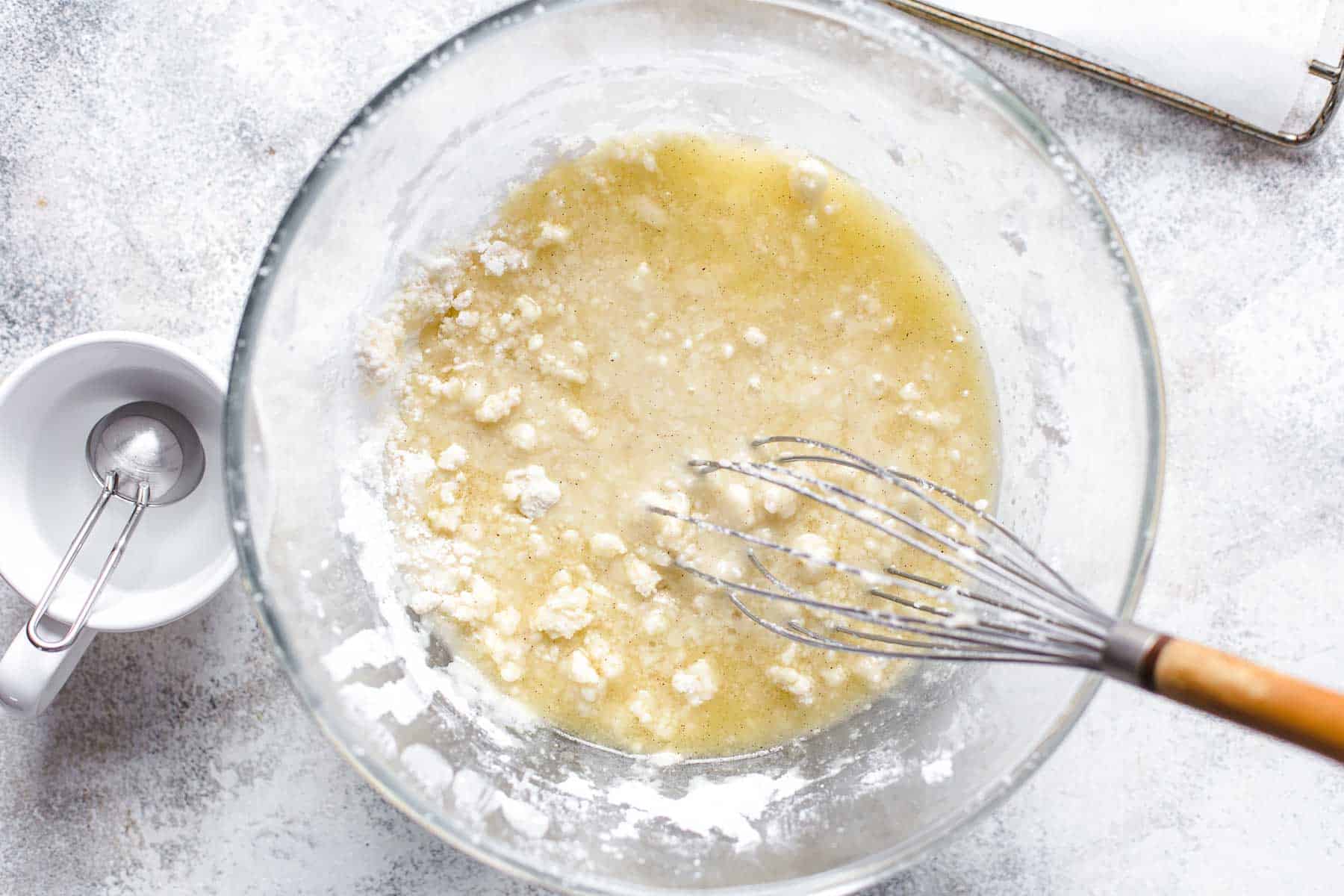 The consistency should be thick but liquid as you can see in the photo below. If the glaze is too thick, it will be too much glaze on the doughnuts, and when it is too thin, it will run down the doughnuts. 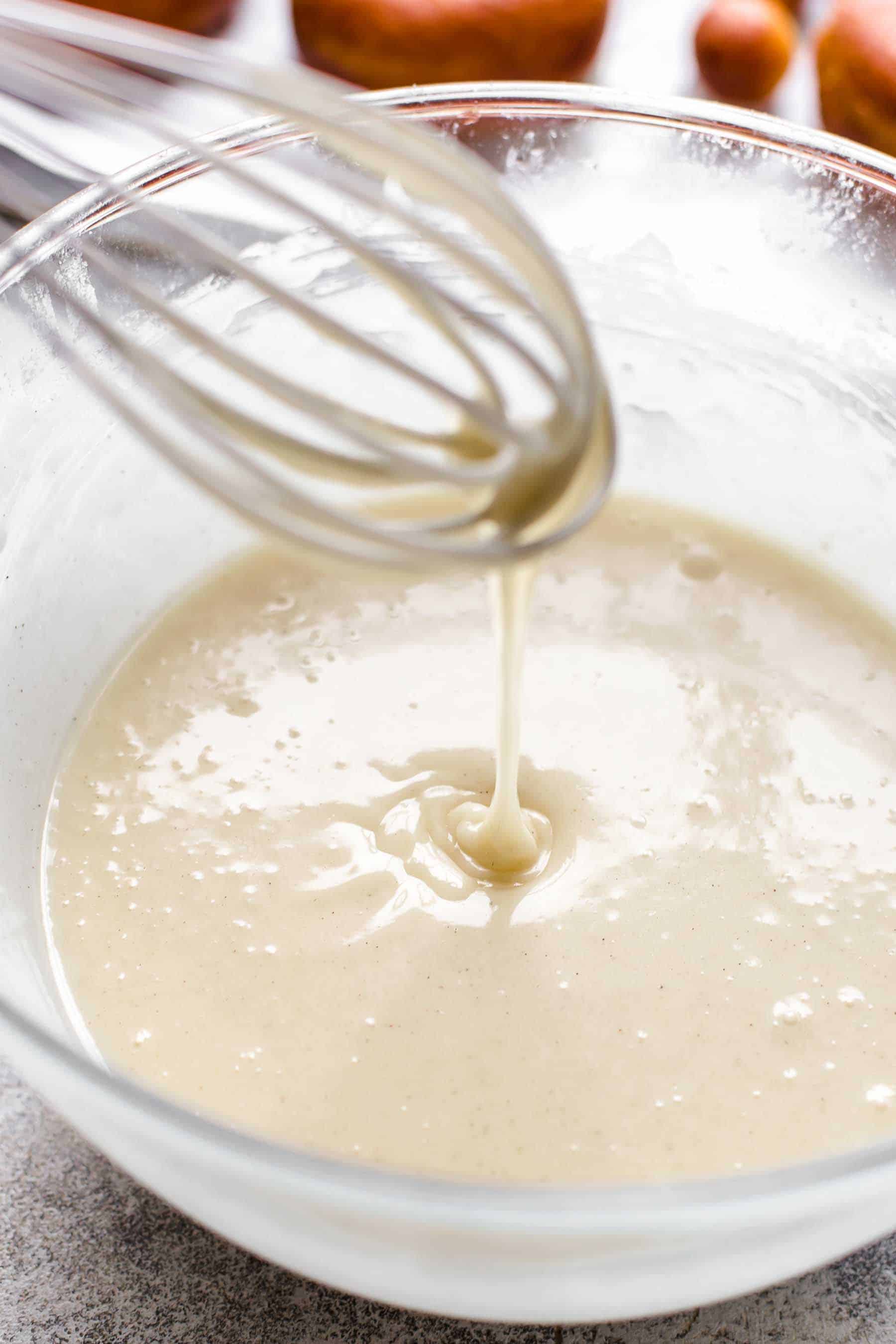 Dip warm doughnuts on each side into the glaze, drip off any excess glaze and place on a wire rack or parchment paper layered baking sheets. 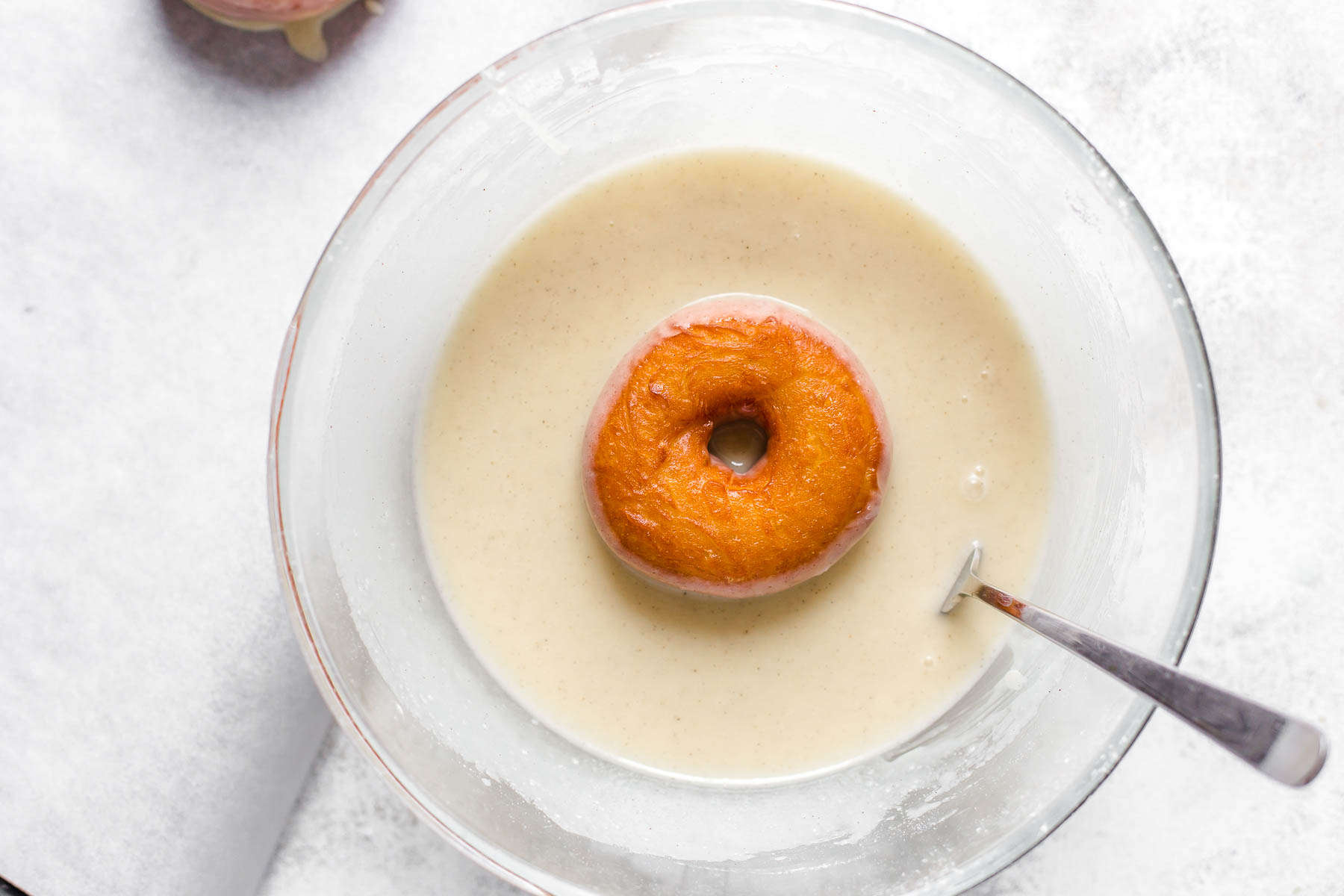 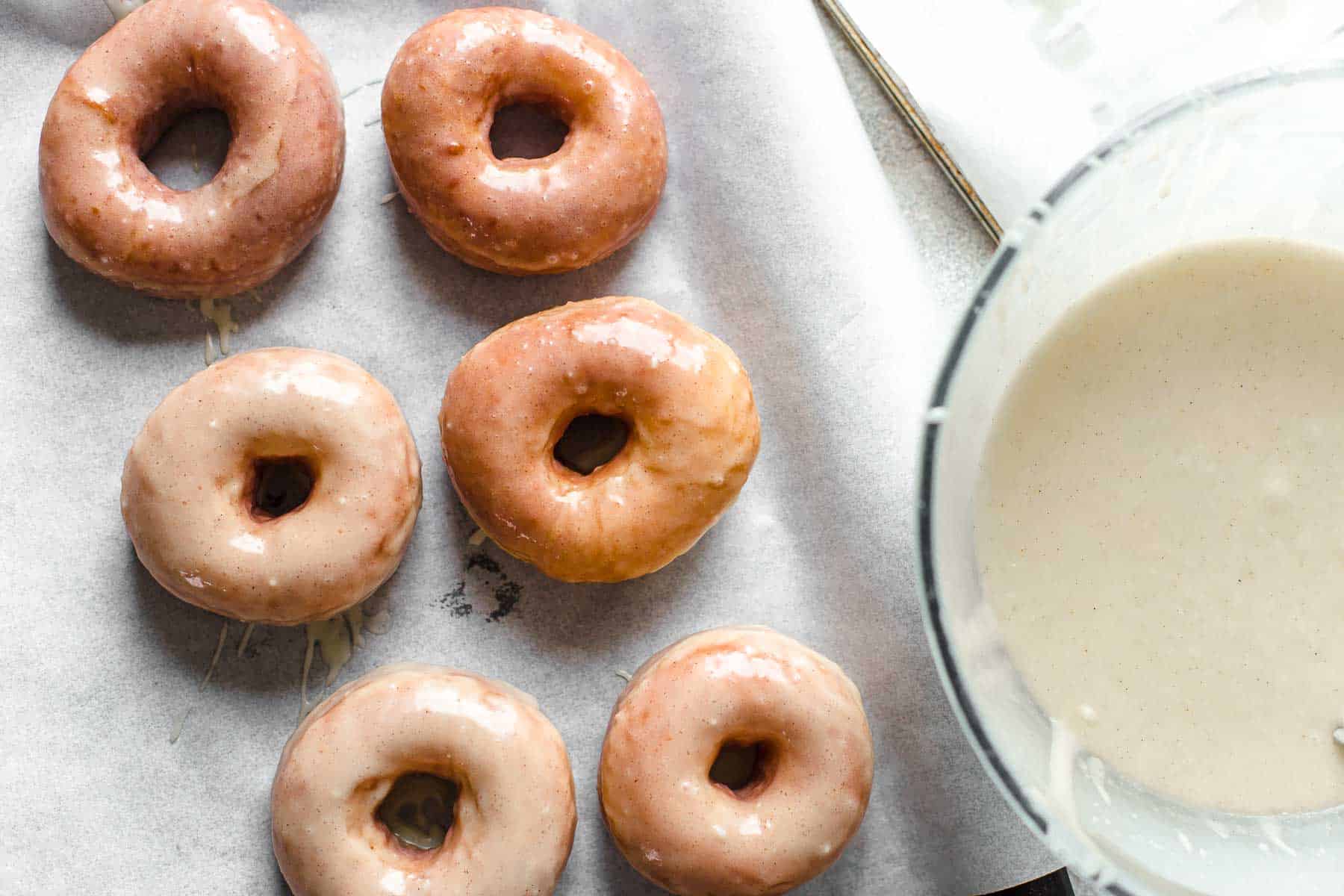 The glaze will set and harden after 20-30 minutes. Donuts are best eaten on the same day.

If you make this Homemade Glazed Doughnuts recipe leave a comment, rate it and tag a photo #alsothecrumbsplease on Instagram! Would love to see your snap! 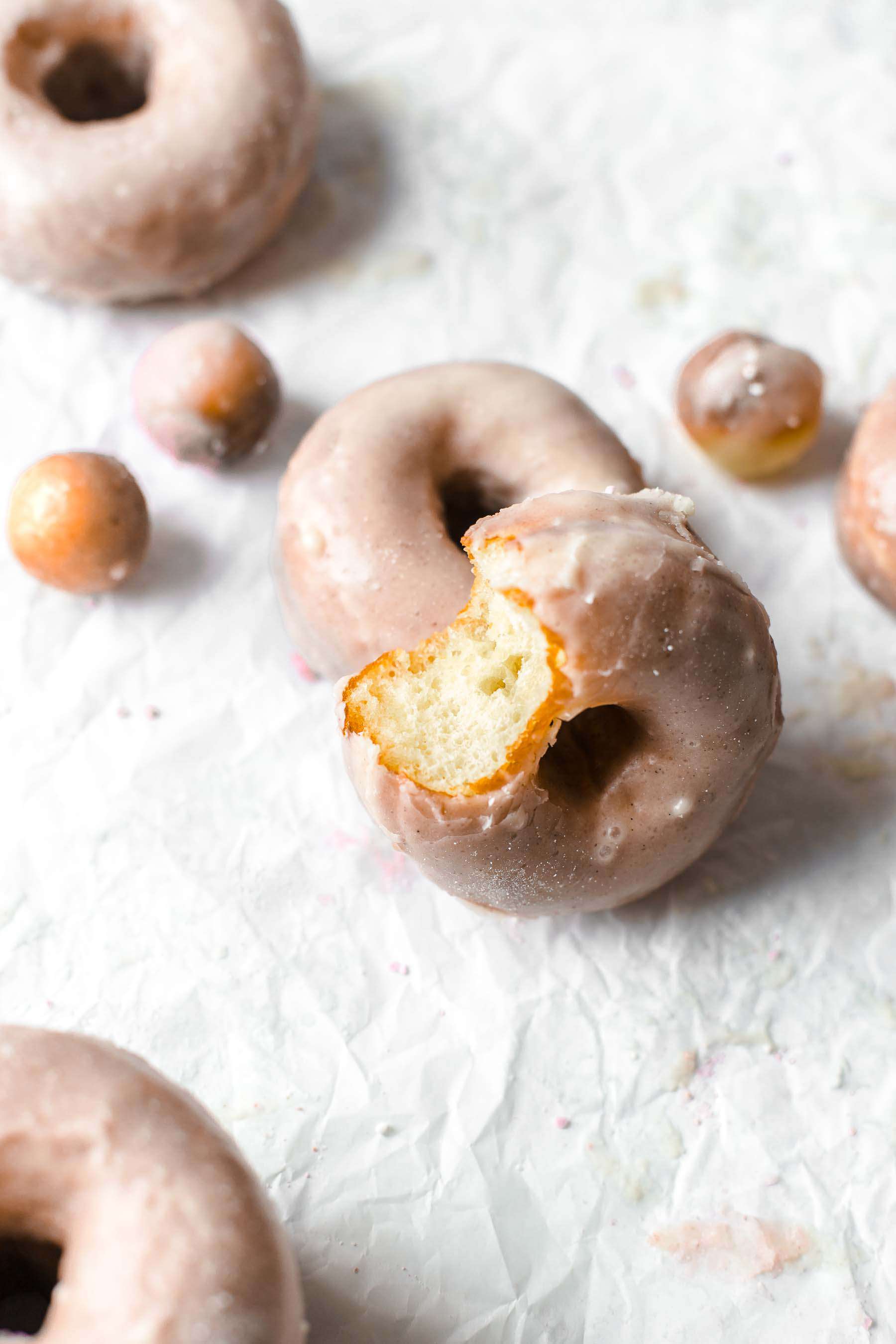 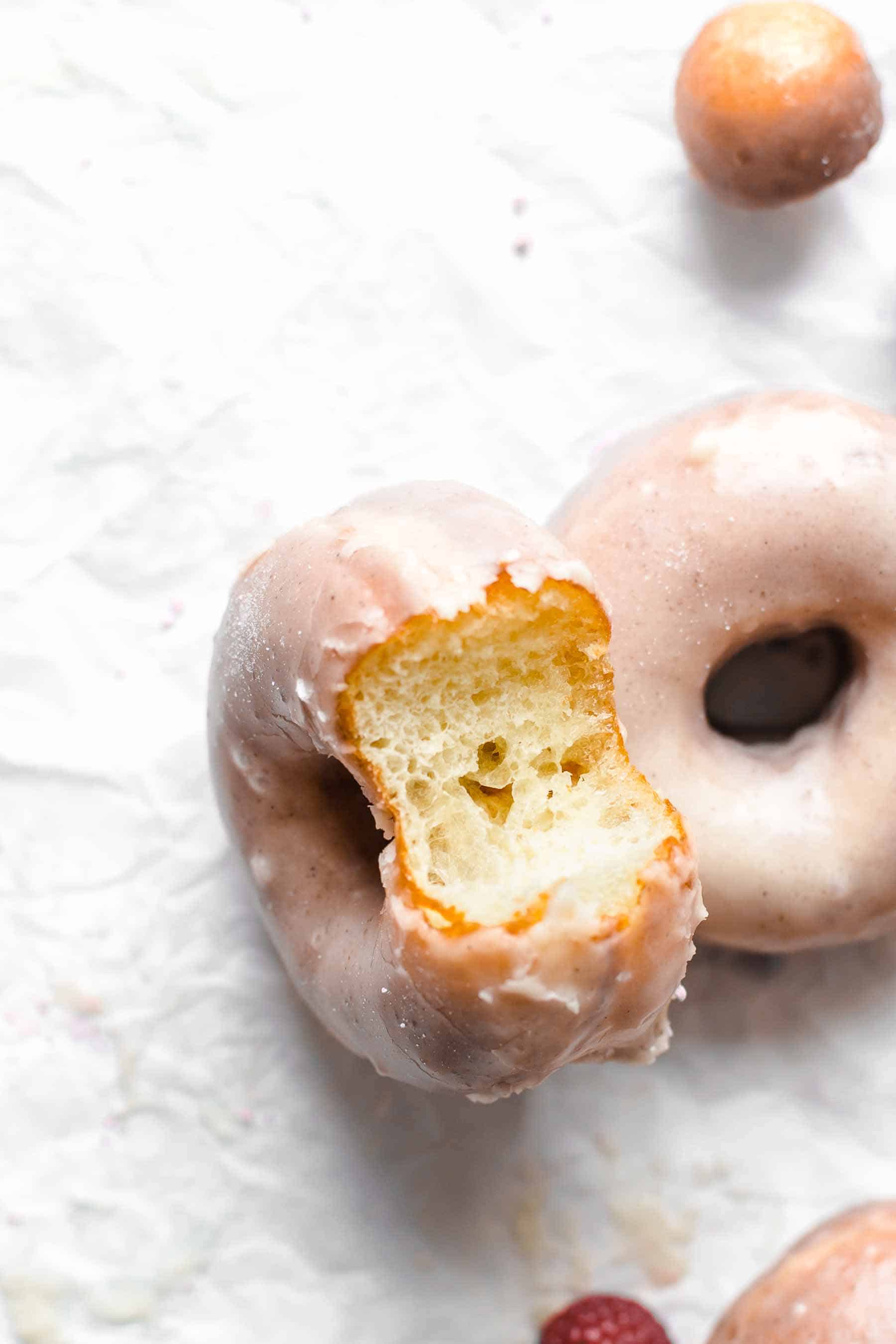 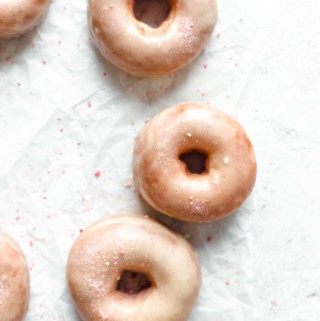 *First, cut off the straight end of the vanilla bean. Then place the tip of your knife below the curled end and cut the vanilla bean through the middle of the bean lengthwise with a sharp knife. Although you don't need to cut it all the way through, it's ok when you do so. Then open the vanilla bean and scrape out the flavorful seeds with the back of your knife. Just use the seeds.   RECOMMENDATIONS:      HOW TO RISE THEM OVERNIGHT: Proceed through step 5 but skip step 2. Instead of rising them in the oven, cover the dough and place into the fridge overnight, 8-12 hours. Remove from the refrigerator and preheat oven to 200°F (100°C). Continue with step 6.

Hi, my name is Sabine Venier! I'm a cookbook author and passionate baker. Here at Also The Crumbs Please, you find trusted baking recipes with step-by-step tutorials. I show you how to bake from scratch!